The Grails® Community Rock Star Award recognizes a member of the Grails community for his or her outstanding contributions to the success of the Framework.

Rock stars in the Grails® community make a difference by:

Congratulations to our 2020 Award Winner!

David Estes was awarded the Grails Rock Star Award during the 2GM Town Hall Meeting in October, 2020. David is the Co-founder and VP of Engineering at Morpheus Data, as well as the creator of the Grails Asset-Pipeline. He also recently joined the Technology Advisory Board for the newly formed Grails Foundation.

David has consistently contributed amazing functionality over the years to the Grails framework through plugins that have massively benefited the Grails community. His plugins, in particular Asset Pipeline, are broadly used by Grails developers and are appreciated by everyone. David is a tremendous asset to the community, an exemplar of an extraordinary technologist, and a pleasure to collaborate with.

The community voted, and we couldn't think of anyone more deserving. David, you are most definitely a Grails Rock Star! Congratulations and keep up the great work! 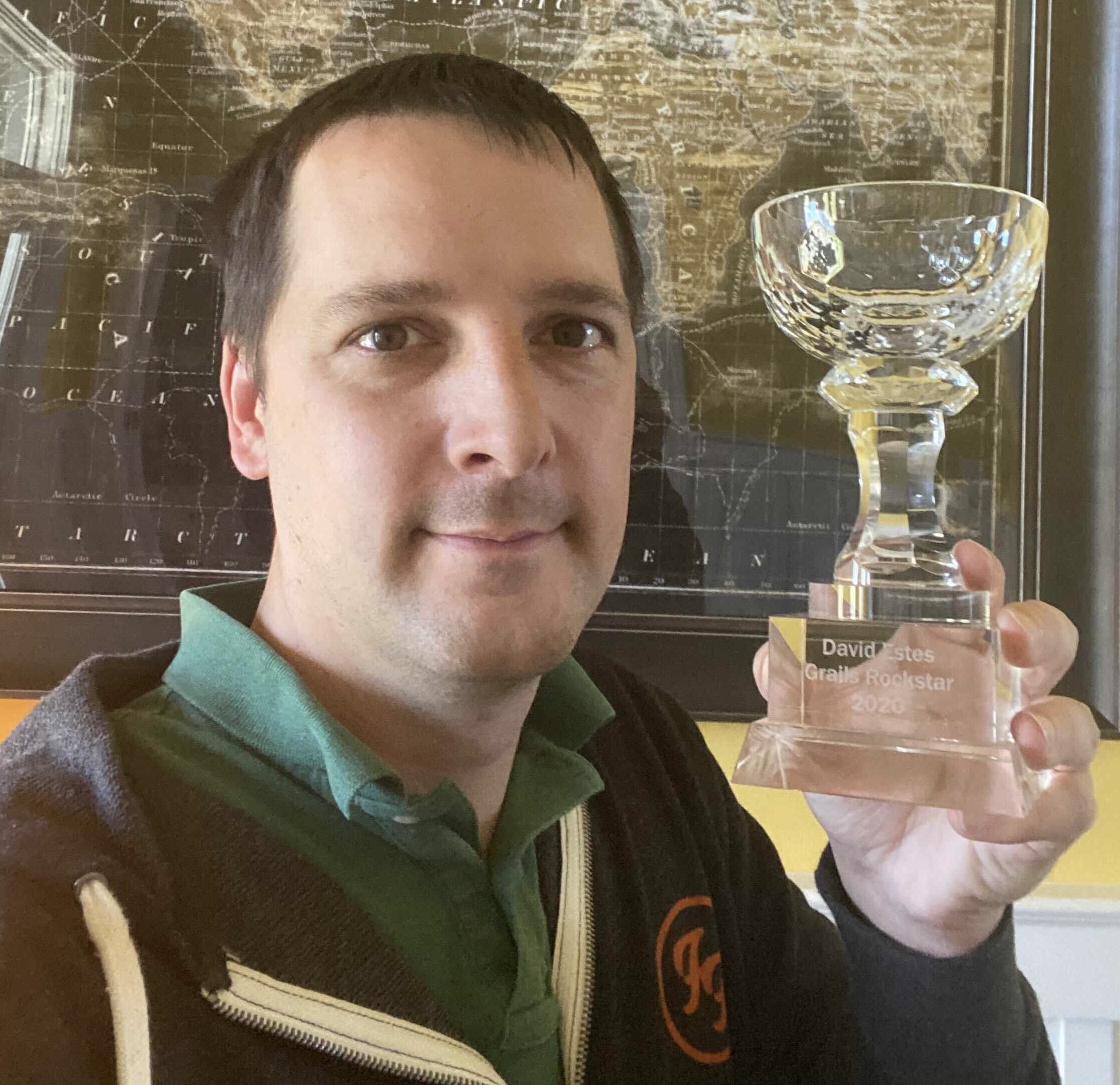 A: I started working on a Grails project around 2011 or so. It was earlier on in Grails back then. I believe the app was running Grails 1.3 at the time.

Q: Have you contributed to any open source Grails plugins?

A: Yes, I have contributed to several Grails plugins, including things like the websockets plugin and other core ones including quartz and mail. I have also created 20+ plugins in the ecosystem that are kept up to date and still function on modern Grails. These include things like the asset-pipeline and the additive plugins it offers. Or tools like Karman, Force-SSL, Security-Bridge, Distributed-lock and many other random ones.

Q: Have you contributed to Grails, GORM, or any other pieces of the core Grails ecosystem?

A: Yes, the community was very open to having outside contributors and still is to this day. It had a bit of a learning curve at first, but it was not too steep and any questions I had as I dug deeper were readily answered by the Grails core team. I have made fixes to several Grails core projects including GORM.

Recently my focus shifted to improving build times on newer Grails by performing tasks on older plugins like grails-gsp that needed some attention.

Q: What has your role been in the Grails Community Slack channel?

A: Normally I'm the asset-pipeline guy, but I also answer questions when I am able to of any general nature. Not as much as I would like due to work schedule, but try to when I can. I actually used to live on the Grails IRC channel originally before Slack when working on asset-pipeline and getting feedback.

Q: Are you involved with any groups or organizations that focus on Grails and the surrounding ecosystems?

A: I'm still active in the Grails community and have worked with several companies in the past that had a lot of Grails development. I have spoken at many GR8Conf conferences by invitation from the community as well and keep in touch with a lot of people I have met from those days. The company I work at now at Morpheus is almost entirely a Grails shop, solving some really cool problems with the framework.

I am also now a member of the newly founded Grails Foundation as a member of the Technology Advisory Board! It is exciting to see growing community involvement in the evolution of Grails as part of the efforts of this foundation.

Congratulations to our 2018 Award Winner!

Ken Kousen was awarded the Grails Rock Star Award during the 2018 GR8Conf US conference in Minneapolis, MN. Ken is a teacher, author, consultant, and speaker with expertise in a variety of technologies, including Java, Oracle, and XML, as well as open source projects like Groovy, Grails, Spring, and Hibernate.

Ken has authored three books and dozens of video courses (available on Safari Books Online). He co-hosts the Groovy Podcast, regularly appears as a speaker on the No Fluff, Just Stuff conference tour, and has given keynotes at conferences around the world. 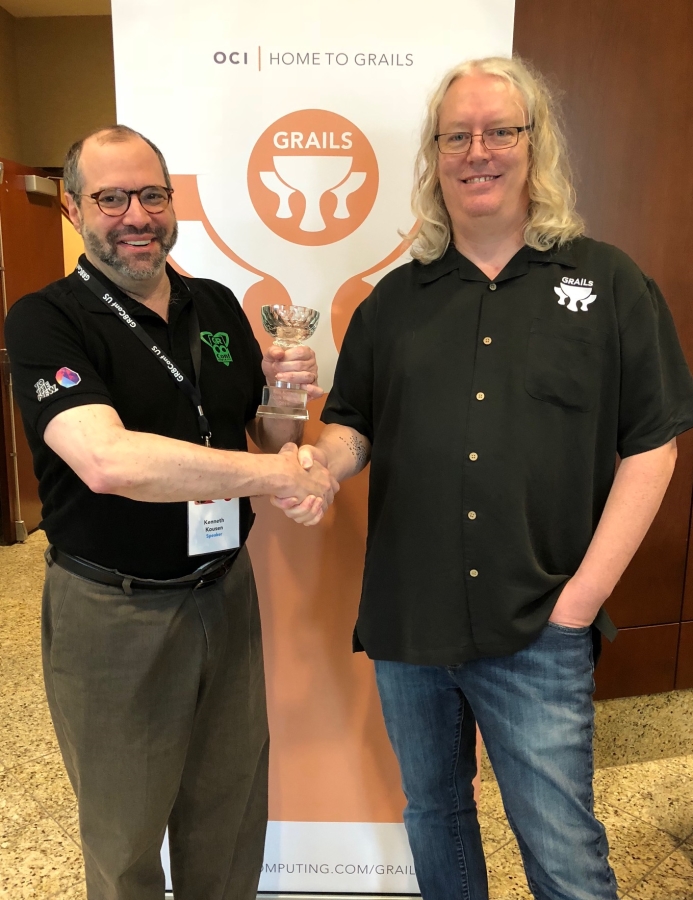 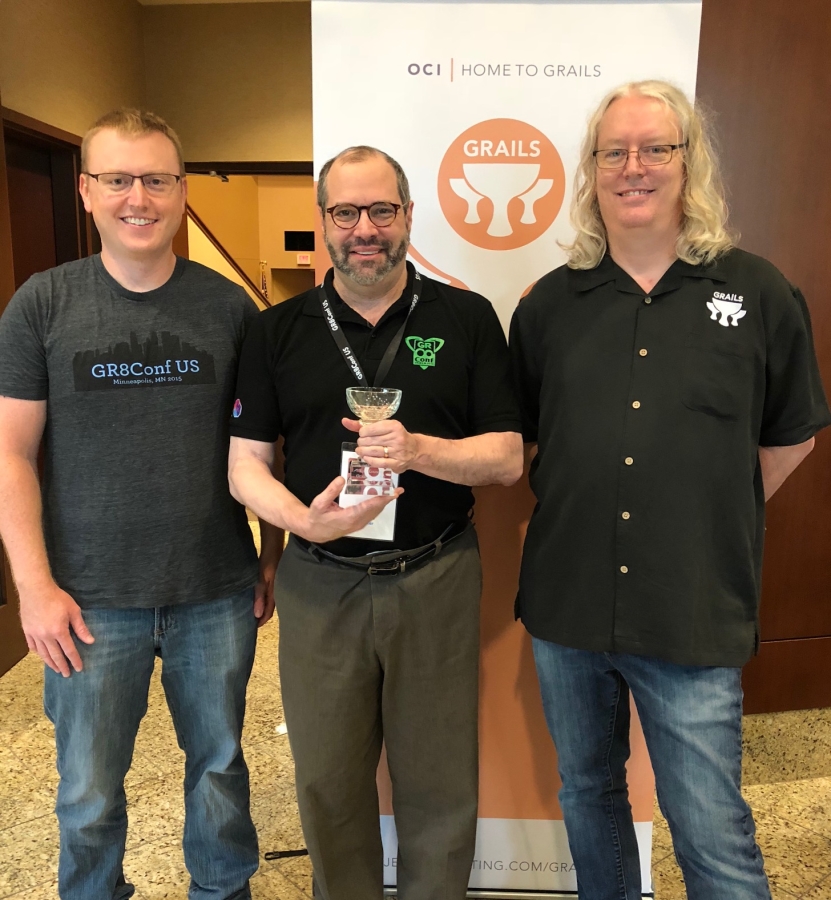 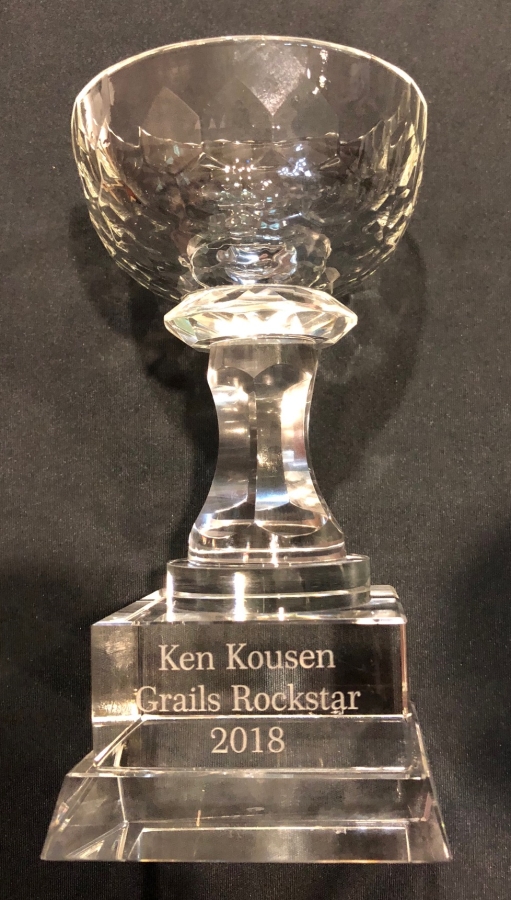 A: I started with both in 2007 and have used them ever since. I wrote a book called "Making Java Groovy," published by Manning, about Java/Groovy integration. I later wrote a book called "Gradle Recipes for Android," published by O'Reilly, which leads to your next question. My most recent book is "Modern Java Recipes," from O'Reilly last August, but that doesn't involve Groovy.

Q: How many Groovy, Grails, and Gradle classes have you taught?

A: Too many to count, to be honest, both onsite and online. I've been teaching all three topics fairly regularly since at least 2010.

Q: How many years have you been teaching? Do you know roughly how many students you've taught?

A: I became a full-time technical trainer in May 2000 and have taught classes ever since. I worked for a training company until 2005, at which point I went out on my own. I'm sure the number of students is in the thousands at this point.

Q: How many Groovy podcasts have you done?

A: I've been the co-host of the Groovy Podcast for about the last three years. We've done around 50 broadcasts during that time. Jeff [Brown] has been a guest more than once.

The Groovy Podcast home page has links to about the last dozen or so. They're also on a dedicated YouTube channel, the audio versions are hosted on PodBean, and the podcast is available on both iTunes and Google Podcasts.

Q: When is the Grails 3 book coming out?

Congratulations to our 2017 Award Winner!

Eric Helgeson was awarded the Grails Rock Star Award during the G3 Summit 2017 conference. Eric is the author of the book, Practical Grails 3, and he is often seen in the Grails Slack Community answering questions and helping other users. Moreover, Eric contributes to the Grails Community with code, plugin development, issues reporting, etc. 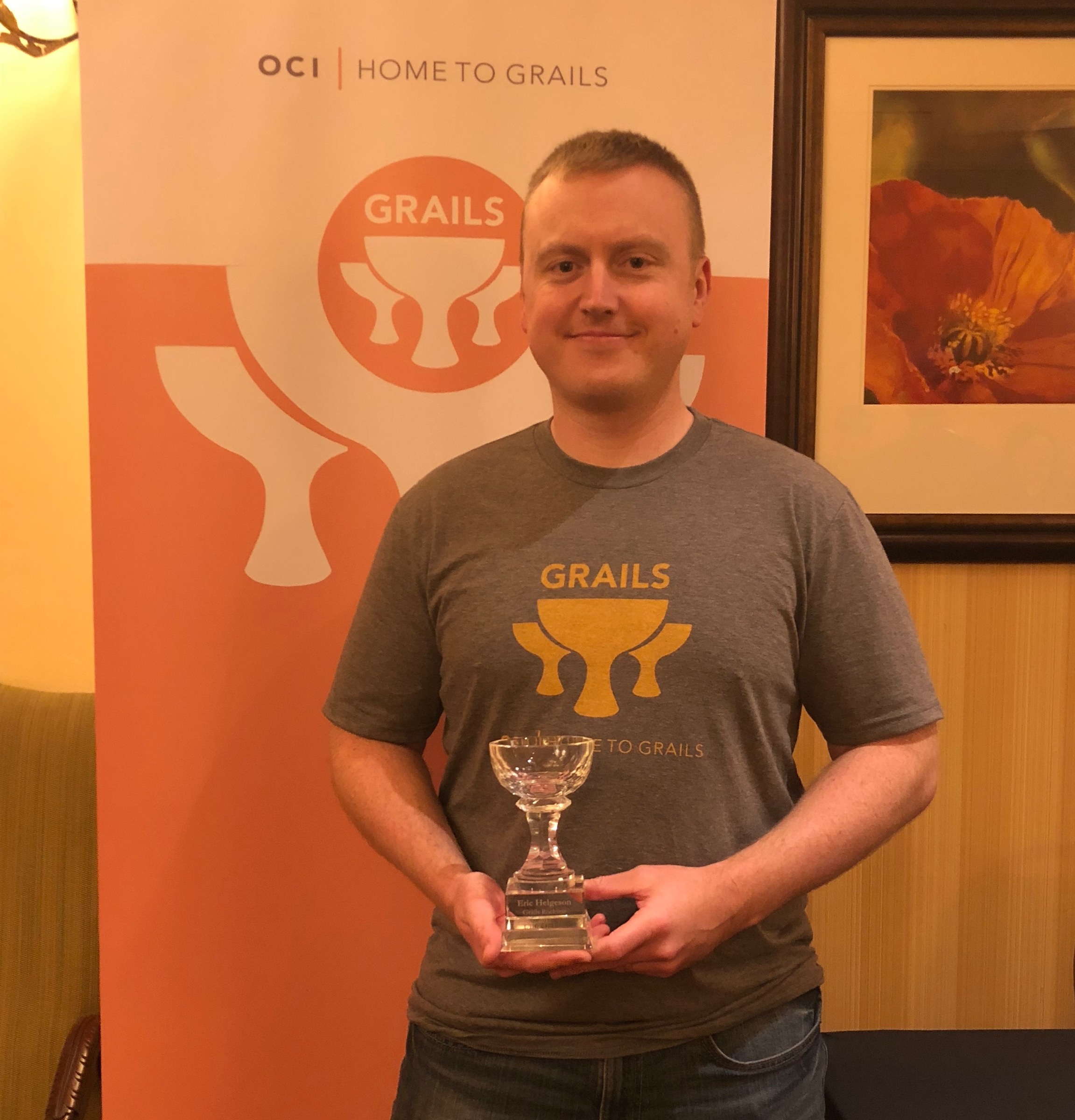 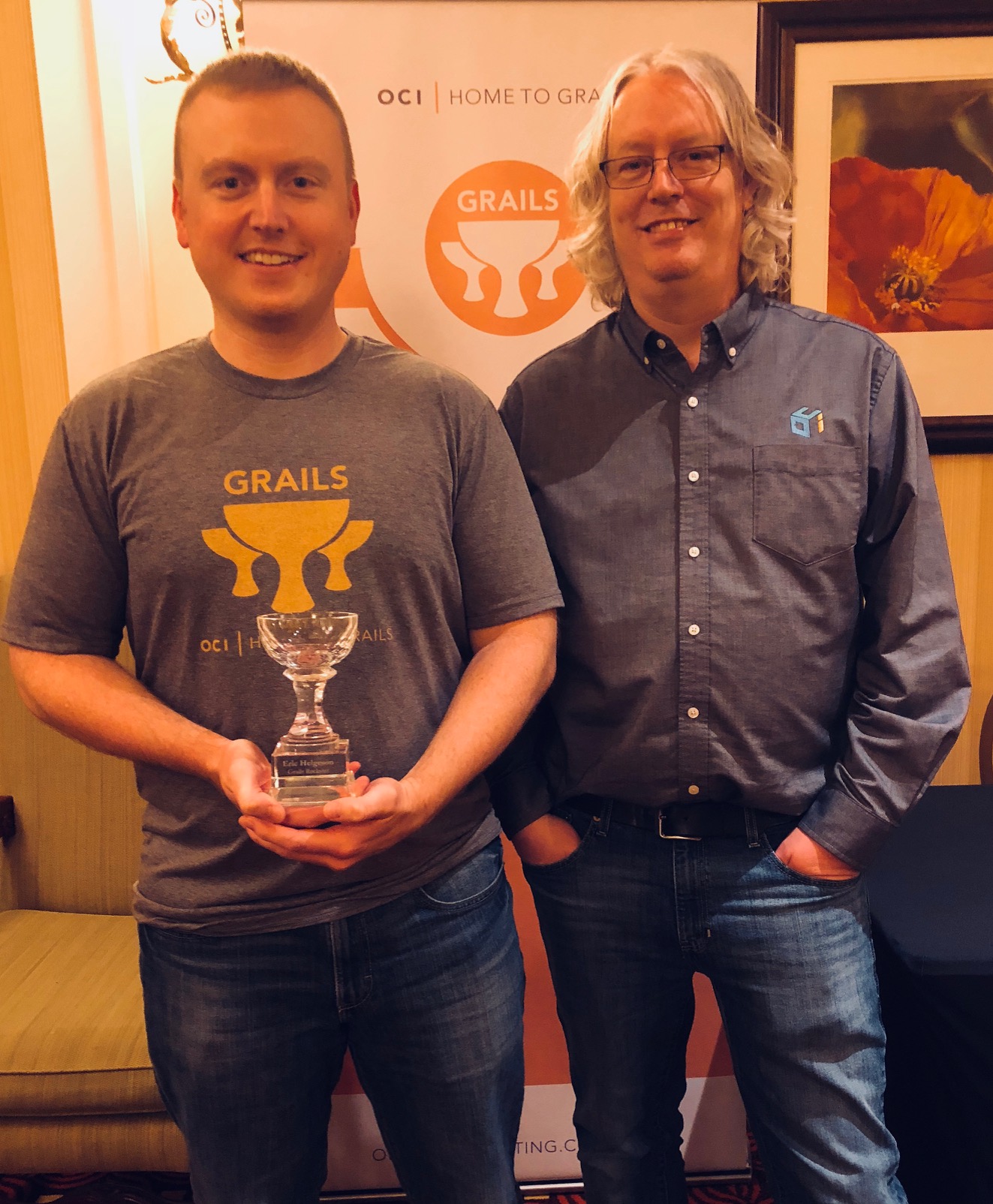 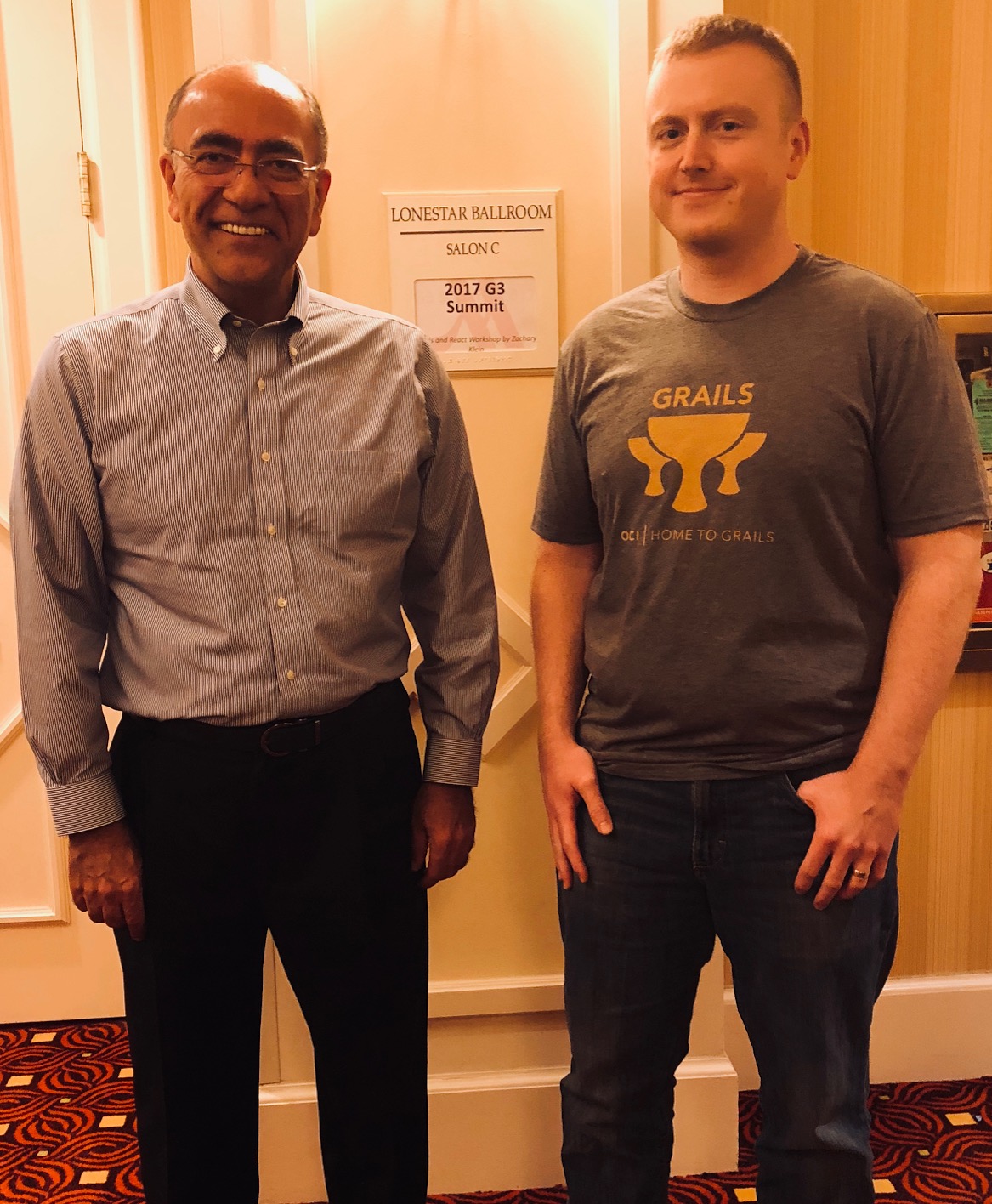 Q: Have you contributed to any open source Grails plugins?

A: Any time I run into an issue, I try to [share the fix with the community]. I've had contributions to Spring-Security-Core, Spring-Session, and Sentry, among others.

Q: Have you contributed to Grails, GORM, or any other pieces of the core Grails ecosystem?

A: Yes, I have provided minor bug fixes and upgrades of dependencies to Grails Core, as well as documentation updates.

Q: What has your role been in the Grails Community Slack channel?

A: I'm an administrator on the Grails Community Slack, and I'm always available to help anyone who has a question or issue with Grails, Groovy, or the JVM in general. It's a great, active community resource to get help and learn from others.

Q: Have you written Grails-related articles or other publications for the community?

A: I wrote the first Grails 3 book, Practical Grails 3, and I have received amazing feedback from the community on it.

I also have a Grails-specific blog at https://www.grails3book.com/blog/ where I write up and share tidbits on what I learn as I use Grails day to day.