Perhaps one of the most critical decisions application designers face when creating a distributed system is how data should be exchanged between interested parties. Typically, this involves selecting one or more communication protocols and determining the most efficient means of dispatching data to each endpoint. Implementing lower-level communications software can be time consuming, expensive, and prone to error. Too often, after investing a significant amount of time and effort, many designers find that last minute changes in requirements or flaws in the initial design lay waste to this crucial layer of software.

Middleware solutions are designed to aid (if not solve) these types of problems. Rather than have each application implement a custom communications suite, designers may instead rely upon the features present in a given Middleware product to act as a de-facto compatibility layer. The Data Distribution Service (DDS) specification is one such solution proposed by the Object Management Group. As described in a prior article, OpenDDS is an open source implementation of the DDS specification that provides a number of pluggable transport options to meet a wide variety of communication needs. Combined with expressive Quality of Service (QoS) facilities, OpenDDS is an ideal solution for those projects which demand a configurable and efficient means of distributing data with little to no risk for the designer.

Starting with version 2.1, OpenDDS provides a new IP multicast transport with improved reliability and better determinism on lossy networks. This article provides a detailed explanation of the multicast transport implementation, its interactions over an IP-based network, and a comparative analysis of other IP-based transports supported by OpenDDS.

Best-effort delivery imposes the least amount of overhead as data is exchanged between peers, however it does not provide any guarantee of delivery. Data may be lost due to unresponsive or unreachable peers or received in duplicate.

Reliable delivery provides for guaranteed delivery of data to associated peers with no duplication at the cost of additional processing and bandwidth. Reliable delivery is achieved through two primary mechanisms: 2-way peer handshaking and negative acknowledgment of missing data. Each of these mechanisms is bounded to ensure deterministic behavior and is configurable to ensure the broadest applicability possible for user environments.

For the purpose of discussing the interactions between reliable peers, it helps to narrow the view of the multicast group to two specific peers: active and passive. The active peer is the publishing side of an association. The passive peer is always the subscribing peer. It is important to remember that control data is exchanged among all peers within the multicast group; however disinterested peers discard payloads which are not addressed to them directly.

The first mechanism used to ensure reliability is a 2-way handshake between associated peers. The handshaking mechanism provides a deterministic bound to how long a given peer will wait to form an association. This feature is also used to prevent the publishing peer from sending data too early. This mechanism is detailed below:

The active (i.e. publisher) peer initiates a handshake by sending a MULTICAST_SYN control sample to the passive (i.e. subscriber) peer at periodic intervals bounded by a timeout to ensure delivery. An exponential backoff is observed based on the number of retries.

Upon receiving the MULTICAST_SYN control sample, the passive peer records the current transport sequence value for the active peer and responds with a MULTICAST_SYNACK control sample. This sequence number establishes a value from which reception gaps may be identified in the future.

Negative acknowledgment is the primary mechanism for ensuring data reliability. This mechanism places the responsibility of detecting data loss on each subscriber which allows the publisher to dispatch data as quickly and efficiently as possible. This mechanism is detailed below: 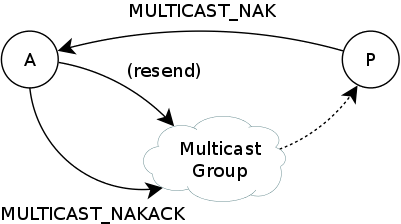 As each datagram is delivered to a passive peer, the transport sequence value is scored against a special container which identifies reception gaps. Periodically, a watchdog executes and ages off the oldest unfulfilled repair requests by resetting the sequence low-water mark and logging an error. Once unfulfilled requests have been purged, the watchdog then checks for reception gaps. In the event a new (or existing) reception gap is identified, the peer records the current interval and the high-water mark for the transport sequence. It then issues MULTICAST_NAK control samples to active peers from which it is missing data. Passive peers perform NAK suppression based on all repair requests destined for the same active peer. If previous MULTICAST_NAK requests have been sent by other passive peers, the passive peer temporarily omits previously requested ranges for the current interval. This interval is randomized to prevent potential collisions among similarly associated peers.

If the active peer receives a MULTICAST_NAK control sample it examines its send buffer for the missing datagram. If the datagram is no longer available, it sends a MULTICAST_NAKACK control sample to the entire multicast group to suppress further repair requests. If the datagram is still available, it resends the missing data to the entire multicast group.

If the passive peer receives a MULTICAST_NAKACK control sample, it behaves just as if the repair request has aged off, suppressing further repair requests and logging an error.

The multicast transport supports a number of configuration options:

For convenience, an example .ini file is provided in the OpenDDS distribution in the following location: $DDS_ROOT/dds/DCPS/transport/multicast/multicast.ini-dist

Currently, there are a couple of restrictions which must be observed when using the transport:

As with other transports, dynamic configuration is enabled by the ACE Service Configurator Framework. A svc.conf file should be created which contains the following:

The transport is loaded at runtime by passing the following arguments to the application's command-line:

Alternately, the transport may be statically loaded by including the dds/DCPS/transport/multicast/Multicast.h header (implies static linking):

Finally, The multicast transport is configured and attached similarly to other transport implementations:

When discussing a wire protocol, it is often helpful to provide a graphical representation of protocol interactions. As described above, there are four transport control sample types used by the protcol state machine:

Examples of these PDUs are provided below. These packets were captured from a SunOS (SPARC) workstation using the odds_dissector Wireshark plugin, available in OpenDDS version 2.1.1: 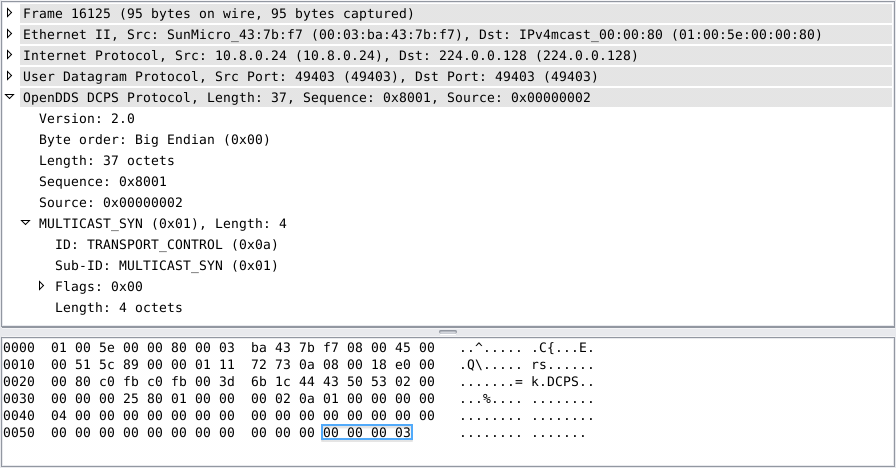 MULTICAST_SYN control samples are sent from active (i.e. publisher) peers. These samples declare an intent to form an association with a specific passive peer. The passive peer is identified by the last four octets (highlighted in blue). This value corresponds to the passive peer's Source ID. 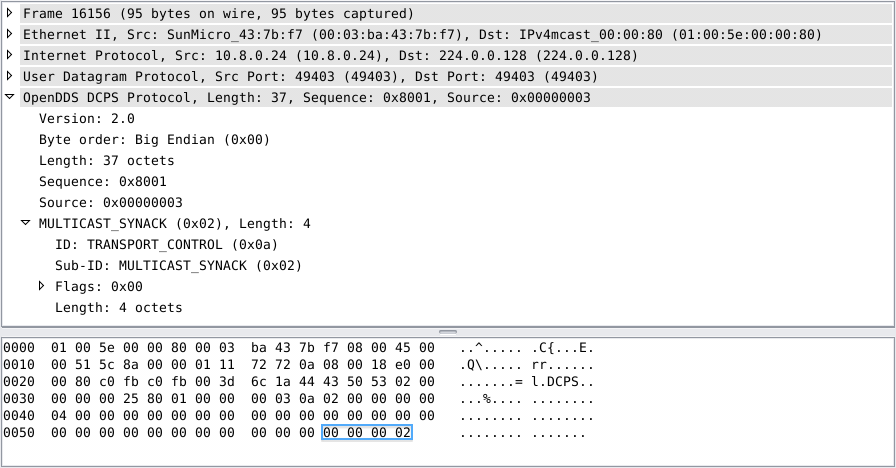 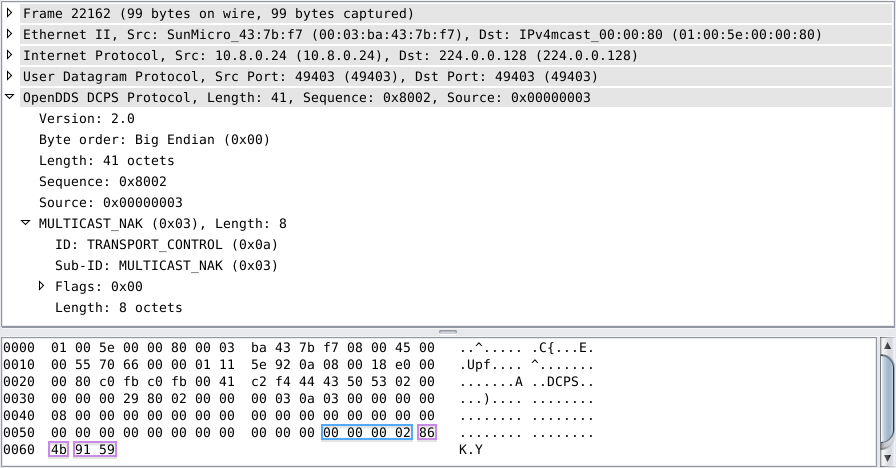 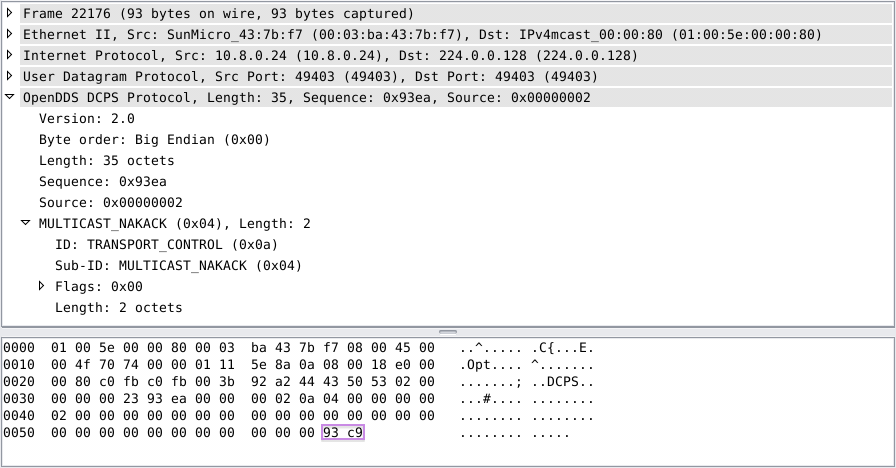 MULTICAST_NAKACK control samples are sent from active peers. These samples are sent when a repair request is unable to be fulfilled. The last two octets (highlighted in purple) indicate the sequence number of the first datagram which can be recovered.

An informal test was constructed to showcase the scalability aspect of IP multicast communication. The scaling test (available as a part of the OpenDDS-Bench benchmarking framework, $DDS_ROOT/performance-tests/Bench) collects latency metrics for dissemination of samples to one or more endpoints. The multicast transport was tested with both reliable and best-effort delivery modes against the udp (UDP/IP) and SimpleTcp (TCP/IP) transports. The following graph represents results collected when running the scaling test between eight similarly configured hosts over a switched ethernet network: 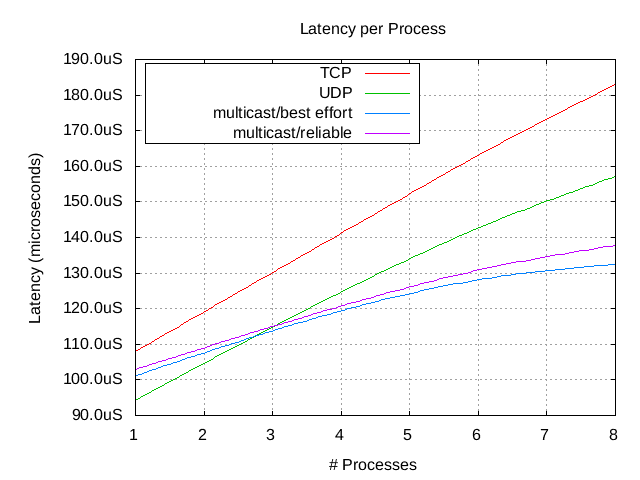 It is important to note that the absolute numbers collected across these test runs should not be used as a basis of comparison. Instead, the relative differences between each data point should be used.

Compared against the unicast IP transports, udp is the only transport which performs better than the multicast transport with respect to latency (notice that latency increases linearly with the number of subscribing endpoints for unicast). The general overhead of dispatching multicast data factors out once the number of subscribing processes are greater than two. This is an indication that unicast transports should still be considered for fan-outs of two or less on this particular hardware. An important point to note is the relative differences between the reliable and best-effort delivery modes. Reliability does impose a small amount of overhead, however said overhead does not increase linearly with respect to the number of subscribers as it does with unicast-based transports.

The above results are a good indication of when IP multicast communication should be considered viable. Given a scenario that a publisher may potentially have several (i.e. greater than two) subscribing endpoints, IP multicast provides the lowest-latency when dispatching data. Conversely, IP multicast is unlikely to scale well in scenarios where a publisher only maintains one or two subscribers.

This article has provided a detailed look at the new IP multicast transport available in OpenDDS version 2.1. The multicast transport provides an desirable solution for those designers who wish to dispatch low-latency data reliably to one or more subscribers. While IP multicast communication has a number of constraints to manage for reliability, we have shown that reliable communication is still possible with a minimal amount of overhead - especially as the number of subscribers scales. OpenDDS is professionally developed and commercially supported by OCI, a full-service software engineering, open source product and training company.