CORBA ORBs typically offer application developers a variety of mechanisms to control request processing. Mechanisms such as POA threading models, which control concurrent request processing, Real-Time CORBA's priority mechanisms, which provides platform-independent control of native thread priorities, Real-Time CORBA's threadpool mechanisms, which controls allocation of threads to requests at the POA level, and Asynchronous Message Invocation (AMI), which allows a client to invoke a synchronous request in an asynchronous manner, are defined by formal CORBA specifications. Other mechanisms, such as an ORB's threading and concurrency strategies are defined by ORB implementers.

TAO's Asynchronous Message Handling feature (AMH) offers application developers yet another tool to control request processing in certain situations as described in this article. Using AMH, an application can preserve a synchronous request's appearance while processing it in an asynchronous manner. Put simply, AMH allows a servant to delegate the processing of a request and transmission of a reply to a thread other than the one from which the servant was invoked. Moreover, AMH employs mechanisms that are similar to those used by AMI, so application developers familiar with AMI should have little trouble employing AMH.

AMH is particularly attractive for optimizing middle-tier servers in three-tier architectures, especially when combined with AMI. A common scenario is a middle-tier server that services requests to process large blocks of data. Often, a bulk processing task can be re-organized into a series of smaller processing tasks that may execute concurrently. The results of these subordinate processing tasks are accumulated as they are received and a reply is formulated and sent to the client as soon as all results are available. Using AMH, a servant invoked to process a large data block can delegate the task to another thread. That thread decomposes the input data block into several, smaller data blocks and forwards each of the smaller blocks to a separate back-end server using AMI. The resulting requests are processed concurrently by the various back end servers. The results from the back end servers, returned via AMI's callback mechanism, are accumulated as they are received. As soon as the sub-tasks are complete and all results have been accumulated, a reply is formulated and sent to the client using AMH's reply mechanism.

AMH may also be useful in other circumstances to:

The remainder of this article compares synchronous request processing with AMH, explains how IDL-defined interfaces are modified for use via AMH, and presents a sample application. Additional information regarding AMH or AMI is available from the following sources:

AMH is included in TAO 1.3a, OCI's commercially supported release, as well as the latest TAO releases from the Distributed Object Computing (DOC) Group.

Additional information regarding Real-Time CORBA's priority and threadpool mechanisms is available in Real-Time CORBA Priority and Threadpool Mechanisms. Request Processing Aspects of CORBA and TAO contains a discussion of the POA's threading models.

Once the server-side ORB dispatches the request to a thread, that thread is bound to the request until processing is complete and a reply is sent to the client. Therefore, the thread is effectively unavailable for the request's duration. Some ORBs can, in certain scenarios, 'borrow' a thread that is already bound to a request for another task. This can happen with TAO, for example, when a thread is waiting for a reply to an outbound CORBA request made by a servant and it is dispatched to handle an inbound request. (This is commonly referred to as a nested upcall.) When the ORB borrows a thread that is processing a request, completion of that request is usually postponed until the task for which the ORB borrowed the thread, e.g., handling a nested upcall, is complete.

AMH allows an application to process synchronous requests in an asynchronous manner; AMI allows an application to make synchronous requests in a asynchronous manner. Combined, these features offer a means for optimizing the performance of middle-tier servers by limiting the time period that threads must be dedicated to processing requests from the front-end clients and replies from the back-end servers. Threads that service client requests are bound to a request only for the time required to forward the request to a back-end server using AMI. Threads dispatched to process back-end replies are bound to a reply only for the time needed to send a reply to the client.

The following diagram depicts a request processed using a combination of AMH and AMI. As before, some details are omitted in the interest of brevity. 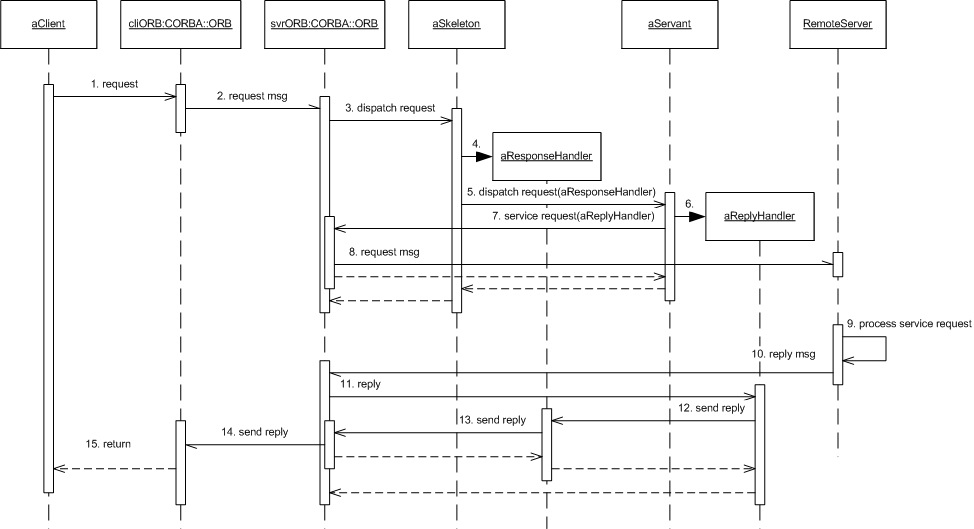 Middle-tier Optimization with AMH and AMI

In addition to preserving the semantics of a synchronous request, AMH also preserves a CORBA object's interface as it is presented to clients. However, the semantics of AMH require a different interface to be realized by the servant as well as a new interface for the response handler, interfaces which are implied by the original interface. The IDL compiler, when directed to compile IDL for use with AMH, generates stubs and skeletons from the original IDL as well as the implied IDL. Moreover, the response handler's implementation is also generated from the implied IDL.

The implied IDL used to produce the skeleton, which declares methods to be realized by the servant, is derived from the original interface as follows:

The response handler's interface is derived from the original IDL as follows:

To compile an interface for use with AMH, pass "-GH" to TAO's IDL compiler. Compile and link applications as usual.

The simple prototype application shown in the following diagram models a three tier architecture. A front-end client (Client) invokes a middle-tier service (Middle_Tier_Server), and the middle-tier service delegates each request to a back-end server (Simple_Server).

The middle-tier process employs AMH and AMI; however, this has little effect on the client and back-end server applications. Clients make what appear to be oridinary synchronous requests, and back end servers process requests synchronously. Therefore, the remainder of this article will address implementation of the middle tier server.

MessengerService requests are processed by a proxy object, called MessengerProxy_i, which is deployed in the mid-tier server. This object is organized as shown in the following diagram: 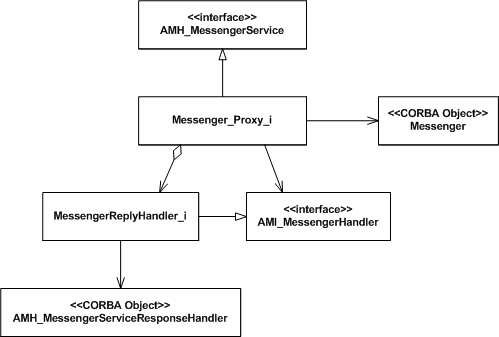 The definition for MessengerProxy_i follows:

A portion of the reply handler's definition follows:

The implementation of responseHandler is:

Duplicating the response handler reference is crucial; recall that it is passed to the AMH servant as an in mode parameter and so must be duplicated to retain the reference over a context switch.

The method for sending a reply to the client is straight forward:

It simply forwards its parameters to the corresponding response handler's method, which in turn sends a reply to the client.

The relevant portion of the mid-tier server's main follows (some typical code, such as checks for nil object references omitted):

This article presented TAO's Asynchronous Message Handling (AMH) feature, another important tool for controlling request processing in CORBA servers. AMH makes it possible to tailor an application to the specific circumstances in which it will be deployed and, when combined with other capabilities such as AMI, can afford significant performance improvements.