Suppose you work for a software company that asks you to help identify ways to achieve process improvement throughout the various units in the company. Your first step is to identify what the existing processes are. As you do so you may see that while there is a lot in common among processes for the various units, there are numerous differences too. These process variations may be driven by differences in management style, developer's experiences, customers expectations, regulations to comply with, etc., among the units.

In reflecting on how to document the existing processes and process improvements, you might have questions come to mind like:

You could attempt to manage such process variability textually using documents describing the process for each unit. However, it would quickly become error prone and tedious to update common portions of the documents consistently, and to ensure that certain documents do not get updated if process changes do not apply.

Fortunately, the Eclipse Process Framework [1] can be used to formally capture and publish the various processes in an efficient manner. With EPF's rich set of reuse mechanisms you can define an element in one process that can automatically be reused (or explicitly not reused) in other processes. In many cases, not only can the element be reused, but it can also appear to be altered when used in different contexts.

To help you fully leverage the power of EPF, this article attempts to provide a summary of these reuse mechanisms that you can refer to while authoring process content.

*Note that although the discussion below is geared towards software development, in theory EPF applies to processes in other system engineering domains.

While this article does not attempt to introduce EPF Composer in detail, a brief overview of EPF Composer will be given in this section. See [2] for introductory material on EPF Composer. In addition, the help content for EPF Composer introduces basic concepts and includes tutorials.

There are numerous process libraries [5] created using EPF Composer to use and adapt to your needs. Community edited versions of these libraries are published on the EPF Wiki [6]. These libraries include Scrum and XP. In addition, a OpenUP library is provided. OpenUP [7] is a derivative of the Rational Unified Process that is iterative, agile and suitable for small development teams. It is architecture-centric and focuses on minimizing risk through continuous stakeholder involvement.

*The process model used by EPF is directly maintained in the EPF code base and Java code automatically generated from this model is called by other code in EPF. This model representation and code generation is done using the Eclipse Modeling Framework ([8]). EMF also has the ability to generate diagrams from the model. This feature was leveraged to supplement the discussion below with model diagrams (for simplicity not all associations are included).

An EPF library is the outer most physical container for method and process elements. It in turn contains multiple plug-ins for further organization of the elements. Plug-ins can reference elements in other plug-ins within the same library. Logical partitioning within plug-ins is then done using UML 2 packages. Method elements and process elements are separated in their own packages as shown in the following figure. 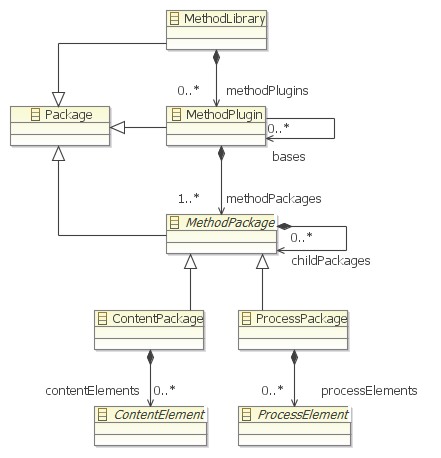 For capturing the intellectual capital behind the methods performed by your software development team, EPF models the following concepts: 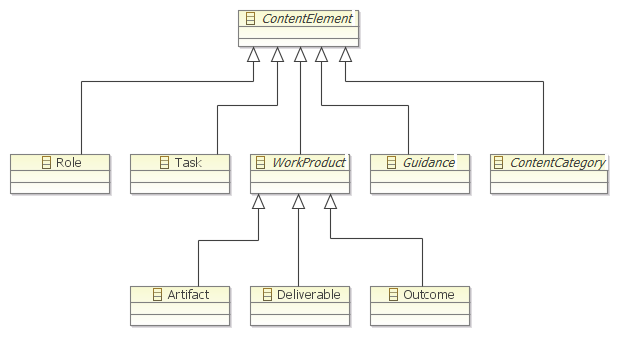 In addition to managing method content, EPF Composer also allows the management of processes. Some of the key process elements are: 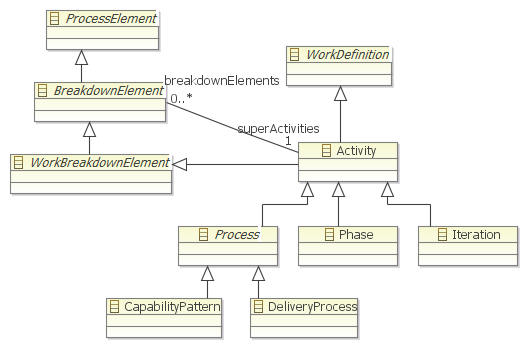 Figure 4: An example of reuse in EPF 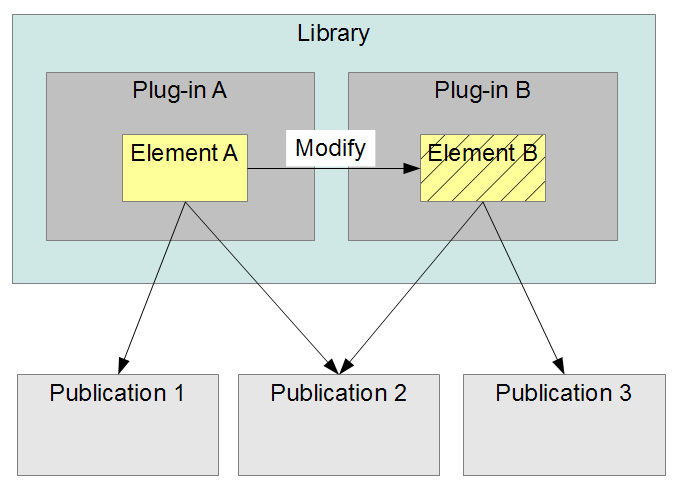 In particular, some things to note about the reuse of Element A in this example are:

Below we will identify the mechanisms to achieve these types of reuse.

The most obvious and straightforward type of reuse is an element being referred to by multiple elements. For example, a role can be referred to by numerous tasks.

An element in one plug-in can refer to elements in another plug-in. However, it is first necessary to indicate for a plug-in which other plug-ins it can reference. This can be done in the plug-in editor page as shown below. 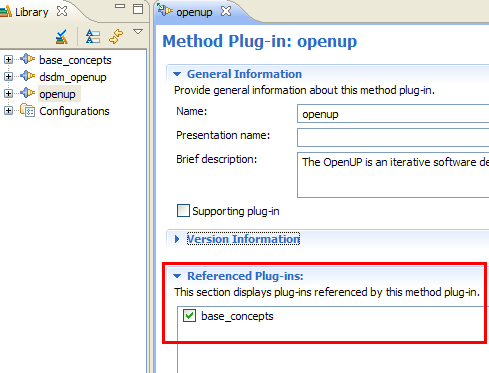 When deciding how to partition plug-ins to facilitate reuse, it is important to keep in mind that through method configuration, method elements from multiple plug-ins can be assembled and filtered for usage in processes and publication.

This configuration capability means, for example, that every task you write in a content category does not need to be accessible along with other tasks in the content category when selecting tasks from this category during process definition.

However, the filtering capability for method configuration runs deeper than just identifying what method content is available for processes or publication. For example, suppose you have a role in Content Package A and a task in Content Package B that refers to this role. If you are using a configuration that uses Content Package B but not A, then the role will not appear in the list of roles for the task. Therefore the associations for the same task can be different depending on the configuration being used. Therefore, as you are partitioning your plug-ins to maximize reuse, keep in mind that it is not an all-or-nothing proposition.

Method content is not directly referenced by process breakdown elements. Instead, descriptors are used, which indirectly connect method content with process elements. A descriptor can then be used to modify attributes and relationships of the method element. This allows, for example, a task to be reused during various phases of the process, with modifications made to the task depending on the context in which it is applied.

An example of a descriptor that is a modification of its content element is taken from the OpenUP library. The steps for the plan_iteration task are shown below: 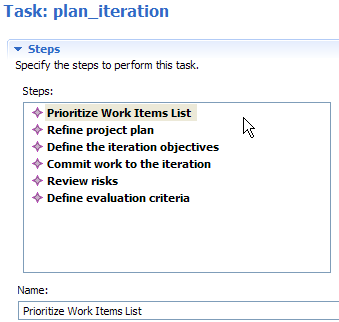 Now, in the openup_lifecycle delivery process is activity "Plan and Manage Iteration". It has a task descriptor that links to plan_iteration. The steps are identical to plan_iteration's steps, however, step "Prioritize Work Items List" has been removed: 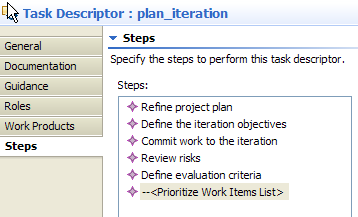 The most elaborate reuse mechanism in EPF is variability. A variability element allows for variation and extension for certain types of elements. Variability is pervasive enough that individual attributes and associations of a base element can be altered without changing the base element itself.

A contributor adds attributes and associations to the base element. As an example, you may have checklist B in plug-in B that adds items to checklist A in plug-in A. In this case, when published, checklist A will appear to have additional items although it was directly modified in EPF Composer. Checklist B will not be seen in the published content. 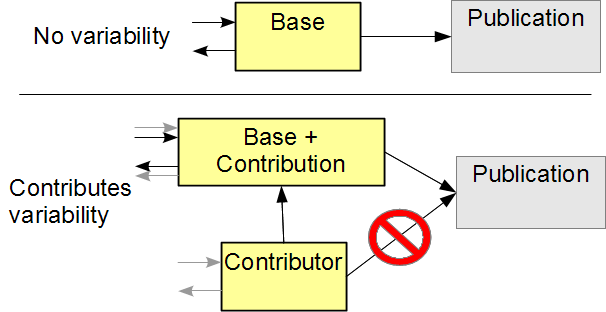