JavaServer Faces (JSF) is Sun's latest technology intent on making web development easier. It was first released March 3, 2004 and was rolled into the fold of J2EE technologies. JSF is a framework built upon Java Servlets and JavaServer Pages (JSPs) technologies to provide a better Model-View-Controller (MVC) architecture. It makes extensive use of user interface components, JavaBeans, and events such that user interface development is more similar to frameworks like Swing.

Since its release, JSF is gaining momentum in the web development community. The Apache Software Foundation has jumped on board also and has created their own open source implementation of JSF, called MyFaces. MyFaces provides much more than just a fully compliant implementation of JSF. This article will take a look at MyFaces and discuss some of the features it provides that are above and beyond what is provided by the standard reference implementation from Sun.

MyFaces is very new. It was released just this past April and will obviously improve as time passes. However, it already packs a punch in terms of features. Its features include:

While all of the features are interesting, this article will focus on the custom components and validators as they will likely find the most appeal with the average web developer.

Using MyFaces is fairly straight-forward for those familiar with Java web development. Follow the steps outlined below to begin using MyFaces in a web application.

To try out the examples in this article or study them in more detail, download MyFacesExamples.war.

While the default components provided with the JSF distribution are useful and arguably sufficient, developers are always looking for something better that increases efficiency. The custom components included with MyFaces do just that. They can work side by side with the default components and any other custom JSF components, giving the developer a richer set of components to choose from. Some of the interesting MyFaces component tags are listed below.

x:dataList
similar to dataTable except it renders a simple, unordered, or ordered list
x:dataScroller
renders a scroller allowing the user to page through a dataTable, showing a specified number of rows at a time
x:dataTable
an improved version of the standard dataTable tag providing sorting capability
x:inputDate and x:inputCalendar
renders a date input control and/or a calendar to assist in selecting a date
x:inputFileUpload
renders a file upload component
x:inputHtml
an inline HTML-based word processor based on the Kupu library
x:jscookMenu
renders a JavaScript menu based on the JSCookMenu by Heng Yuan; mimics complex drop-down menus used in popular GUI applications
x:panelLayout
allows dynamic page layout control
x:panelNavigation
renders a hierarchical (vertical) navigation menu and remembers its open/closed/active state over different pages
x:panelTabbedPane
presents a collection of panels organized by tabs; selecting a panel's tab displays the panel; only one panel is visible at any given time
x:popup
renders a popup (similar to a tooltip) which displays on a mouse event
x:rssTicker
retrieves and displays an RSS feed for a specific URL
x:selectOneCountry
renders a choose box with a list of countries
x:tree and x:tree2
renders two different styles of an expandable/collapsible tree view similar to the Folders view in Microsoft™ Windows Explorer

While it would be great to discuss each of these component tags in detail, it would cause this article to be much longer than intended. However, it is desirable to see the tags in action, so examples of a few of the tags will be shown below. 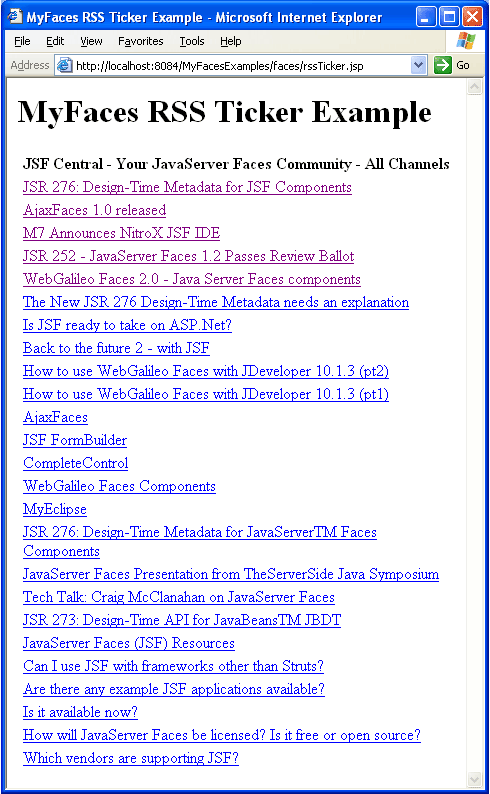 Note the /faces in the URL. This is the virtual path mapping to the Faces Servlet.

For example, if using the extension mapping configuration, the above URL would be http://localhost:8084/MyFacesExamples/rssTicker.jsf

The first two lines of the JSP are standard JSF taglib declarations which allow use of JSF tags. The third taglib declaration allows use of the MyFaces custom tags and gives the tags the recommended prefix, x. The x:rssTicker tag is easy to use. As the name implies, the rssUrl attribute specifies the URL for the RSS feed. The other tags surrounding x:rssTicker are standard JSF tags. All JSF tags are required to be within the f:view tag. h:panelGrid renders an HTML table.

MyFaces improves on the standard JSF tags for entering and displaying dates, especially when one uses their calendar capabilities. The following example allows the user to enter a date. When the Submit button is pressed, the date is shown on a calendar. 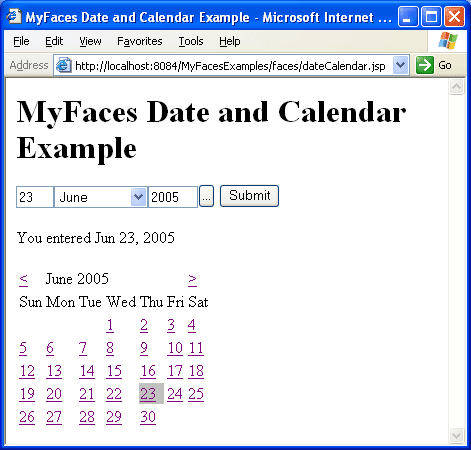 When the '...' button is pressed, a popup calendar appears, giving the user assistance in selecting the date. 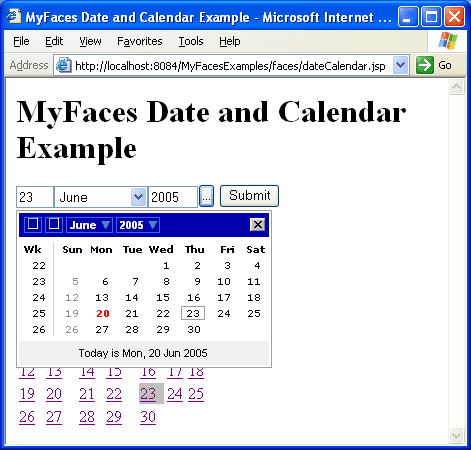 JSF components are usually associated with a JavaBean, especially those taking input from the user. The associated JavaBean is considered the model in the Model-View-Controller architecture pattern used by JSF. A user interface with associated, but distinct, JavaBeans allows for a cleaner separation between the model and the view. The JGoodies Binding API accomplishes this for Swing user interfaces as discussed in the June 2005 SETT Article.

The date and calendar example uses a single JavaBean to store and redisplay the selected date. Since only a date is stored, java.util.Date could have been used directly, which is Ok because it is a JavaBean. However, for illustration purposes, a JavaBean class was created to store the date. Keep in mind backing beans usually contain additional fields and methods because usually more values are shown or taken as input in the JSP.

The JSP can then use the bean by its managed-bean-name.

The page uses two forms. Neither of the forms specify an action or target page so the default behavior will show the same page again, but with a possibly updated date.

The first form contains the x:inputDate tag, which displays the first date input component shown in the above browser snapshot. The value attribute specifies the initial value to set when rendered for the first time. It also specifies where to store the entered date. #{dateBean.date} is an expression language (EL) expression accessing the dateBean's date property. Specifying true for the popupCalendar attribute adds the '...' button, which shows the calendar when pushed.

The second form contains the x:inputCalendar tag rendering the HTML calendar. The value attribute again accesses the dateBean's date property. However, unlike the x:inputDate tag, the initial value is always updated, not just when rendered for the first time. The currentDayCellClass attribute specifies the cascading style sheet (CSS) class used for the current day (i.e. the day stored in dateBean's date property). If the current day is not styled differently, users can't tell which is the current day as the default is to render with the same style as all the other days of the month. The currentDay CSS class simply specifies a silver background.

Using other attributes of the x:inputCalendar tag, the calendar can be made more visually appealing by applying additional styles.

In addition to custom components, MyFaces also provides custom validators. These include:

The final example illustrates the use of a few of these validators. If the user is presented with the following form, enters the values shown, and clicks Submit, the validation errors shown to the right of the fields will appear.

The backing bean for this form is below.

The JSP is given access to the bean via the following entry in faces-config.xml.

The JSP for this example is below.

As mentioned earlier, the h:panelGrid component is a standard JSF component that renders an HTML table. In this example, three columns are specified. h:panelGrid will fill the HTML table cells from left to right with the components it contains, creating rows as necessary when the specified number of columns is reached.

h:outputLabel renders an HTML label element. h:inputText renders an HTML text input field. h:inputText is given an ID so that other components/tags can reference it. The ID is referenced by the for attribute of the h:outputLabel preceding it and the for attribute of the h:message following it. The h:message tag outputs any validation error messages for the component it references. The h:inputText's required attribute indicates the field must contain a value. This is what caused validation to fail for the name field in the above browser screenshot.

Validators are applied to an input value by adding the validator tag as a child element of the input component tag. As shown above, x:validateEmail and x:validateEqual are children of h:inputText tags. The x:validateEqual tag validates that the component referenced in the forattribute has the same value as the component for which it is a part. In the above example, email2 must be equal to email1. This is what caused validation to fail for the email2 field in the above browser screenshot.

This article just scratched the surface of what MyFaces and JSF can do. It included a look at some of the standard JSF components and just a few of the interesting custom components and validators provided by MyFaces. The examples also showed that because of JSF's component-centric approach, one can pay much less attention to details of the protocol (e.g. HTTP) such as the request, the response, and request parameters.

Interest and momentum in JSF is increasing, further evidenced by the fact that many IDE developers are adding or improving JSF support. If interested in web development, the reader is strongly encouraged to check out MyFaces and/or JSF in more detail.