Historically, web services in Java have vexed developers with myriad specifications and complex solutions. Surrounded by legions of W3C specs, JSRs, and XML descriptors, these developers endured complexity while other Java communities (such as EJB3, Seam and Guice) celebrate the elegance of Java 5 and beyond. Moreover, with the success of the sleek REST school of web architecture, there is a fitting rallying cry: "hear our Java Simplification Request for web services!"

If only there were a world in which Java developers express web services in a compact manner, where tools assist with the mundane, "plumbing" details. This world is a far cry from the status quo, and certainly appeals.  For example, what if web services were as easy as:

Welcome to the world of JSR 181: the above is a bona fide web service. JSR 181, "Web Services Metadata for Java", rescues downtrodden web services developers with a simple, annotation-based development model for common web service tasks. Combined with a lightweight HTTP server in Java 6, JSR 181 enables rapid prototyping of web services (WS) and brings WS development into the modern era of Java.

This article has two goals:

It is assumed that the reader understands web services as an approach to distributed computing, and has a basic knowledge of web service constructs (e.g. WSDL, SOAP). All examples require JDK 1.6.x.

There are two main eras of web services in Java: JAX-RPC and JAX-WS. Articles on both topics refer to several JSRs and their implicit relationships. This section provides a bird's eye view of the landscape.

JAX-RPC represents the first version of web services in Java. See the graphical overview below. Some key points: 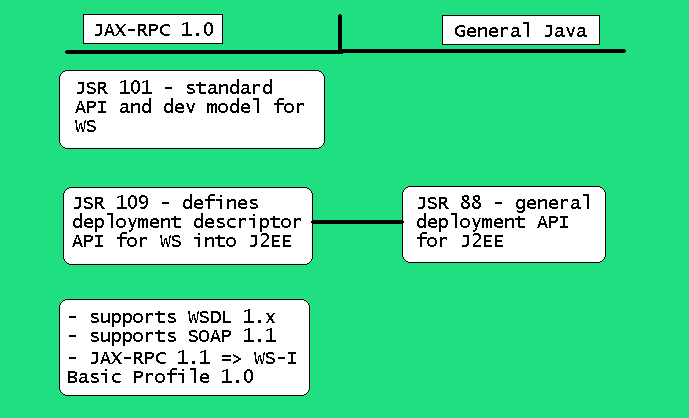 Though initially met with considerable excitement, there are problems with JAX-RPC 1.x: the implementation is complex and competing technologies/philosophies (e.g. Apache Axis, REST) offer simplicity that is seductive, despite being non-standard. Also, new specs and standards render some of the machinery of JAX-RPC 1.x (e.g. data binding) as obsolete. Most of all, since the release of JAX-RPC, the Java landscape itself underwent seismic shifts, particularly with respect to EJB.

Initially, tools (e.g. XDoclet) assisted with the generation of deployment descriptors. Later, Java 5 brought the promise of annotations. In recent years, prominent authors railed against the complexity of J2EE and EJB. Alternative frameworks (e.g. Ruby on Rails) introduced simple, Zen-like philosophies, such as "prefer convention over configuration". All of these forces culimated in a shift against the explicit use of complex deployment time descriptors, and even XML configuration. EJB3, Seam and Guice clearly reflect this shift.

For version 2 of WS in Java, the technology was renamed as JAX-WS 2.0. Just as JSR 109 is the primary spec for JAX-RPC, JSR 224 "Java API for XML-Based Web Services", is the central document for JAX-WS. Some of the spec's stated goals pertain to evolving standards:

However, the following goals are more interesting:

See the graphical overview below. There are several themes here: 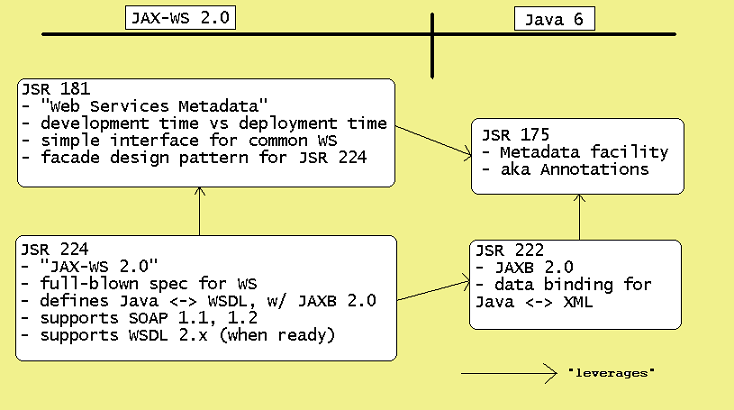 The full JAX-WS spec (JSR 224) exceeds the scope of this article but, as noted, it defines the architecture for "WS Version 2." Clearly, it relates to JSR 181. What is the relationship? Some answers come from the introduction of the JSR 181 spec:

In short, JSR 181 is "Web Services Lite": all of the common WS functionality, without that complex aftertaste. In the parlance of OO design, JSR 181 is a facade design pattern: a simpler interface to the full-blown JSR 224 (see diagram below). It truly represents a "front-end" to JAX-WS as it requires the presence of JSRs 109, 224 and 175.

Mercifully, the JAX-WS 2.0 reference implementation contains all of the WS-oriented JSR solutions and is bundled in Java 6, along with a lightweight HTTP server. This allows us to experiment with JSR 181 out-of-the-box. 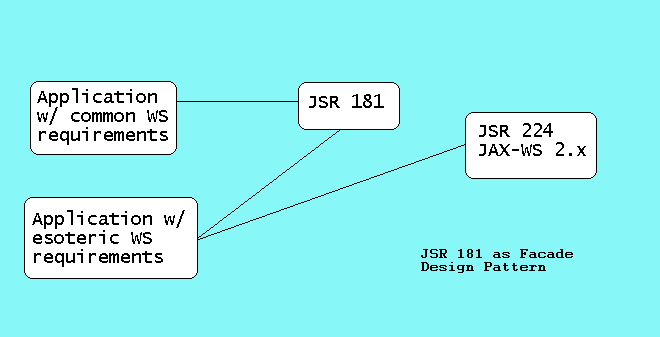 The Development Model in JSR 181

In the JAX-WS world, a web service requires these artifacts:

JSR 181 requires only the SIB (i.e. the business logic). Annotations are used to generate the other artifacts. No doubt, annotation of business POJOs should be music to the ears of the long-suffering WS developers.

There are several programming models defined in JSR 181 (only the first is required by implementations):

The examples in this article use the "Start with Java" model.

Before listing all of the available annotations in JSR 181, we'll start small, to get a view of the landscape of the JAX-WS tools. The first example (available here) is a trivial "string concatenation" service.

Let's begin with the service implementation bean in Java:

Note the annotations on this simple class, which clearly denote a web service and a "web method." Amazingly, we are done with development and can start testing the web service! The JSR 181 processor will take care of the rest. To prove it, we write a main method to publish the service to the HTTP server contained in Java 6:

The main method creates an instance of the SIB, and calls Endpoint.publish(). The first parameter, a URI, specifies the address and transport/protocol. The current javadoc states that for a 'http:' URI, it is assumed that the SOAP 1.1/HTTP binding is used. The publish method uses a default configuration to create the necessary server infrastructure for publication.

Ant takes care of the next steps (see build_server.xml for details):

Once the server is running, we can point a browser to http://localhost:9998/concatservice?wsdl: 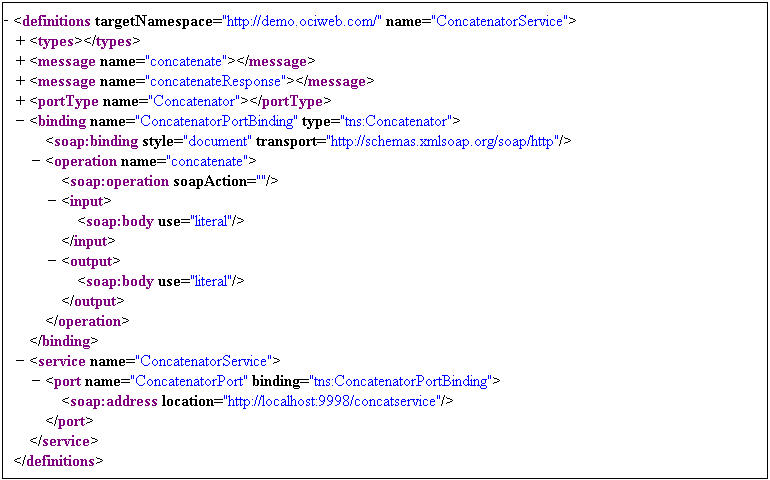 Presto! With stunning ease, the web service is available, and follows these JSR 224 conventions:

If we point the browser to the URI of the schema types:

We see that the types follow a similar, logical convention. However, there's more: the JSR 181 processor generates these classes for us. In the example directory, you can find the generated Java classes Concatenate and ConcatenateResponse. Note how they are annotated with JAXB meta-data. These classes are entirely inline with the sophisticated JSR 224 conventions.

Here is the simple client class:

This class simply uses a ConcatenatorService object to acquire a proxy for the web service operation, and then uses it with concatProxy.concatenate. Note there are no annotations on this class: where do the other classes originate? The answer is another JAX-WS tool, wsimport. The Ant build on the client side works like this:

The output from the client is:

Example 1 represents a complete round-trip from client to server for a trivial web service. Note the compact amount of code and how it concentrates on the business logic for the task at hand. With JSR 181, Java WS development joins EJB3 in the modern era of annotations.

The last example demonstrates the JAX-WS tools. However, the annotations are the heart of JSR 181. The table below gives a broad look at the available annotations:

The most effective way to learn a given annotation is to modify the server Java class in Example 1, run the HTTP server from Ant and view the resulting WSDL in the browser. Also, one should examine the generated Java classes. Here is a starting example to try in this interactive manner:

This example, though unabashedly contrived, illustrates more of the JSR 181 annotations.

The scenario: Superheroes, like many enterprises, have concentrated on their core competencies and have farmed out the manufacturing of their super-materials to specialty factories. Acme is one such manufacturer; it has a division to support the "arachnid class" of superhero, which has strong demand for custom-made super silk. In the past, the superheroes have interfaced with Acme's Arachnid Division through legacy technologies. Now, Acme wants to join the modern era with a new, well, "web service."

Acme has selected Java and JSR 181 as their technology. The specific goals include:

Do Try This At Home (Not in Production)

Before examining the code, note:

This example (available here) uses the same structure and Ant tasks as Example 1. The server side exists entirely in Acme.java, which we analyze here. First, the legacy record:

Here is the legacy interface, decorated with JSR 181 meta-data:

Recall in JAX-WS terminology, this interface is a Service Endpoint Interface (SEI). Note the following points:

A stated goal of JSR 181 is to separate public contracts from private implementations; this dovetails with an Acme requirement. The following Service Implementation Bean (SIB) demonstrates this:

That's it for the server! The client steps through the use case of getting an estimate, making an order and confirming receipt. As with Example 1, JSR 181 and JAX-WS perform an astounding amount of heavy lifting.

As noted, the HTTP server in JDK 6 is not appropriate for production. In order to move Example 2 to a production enviroment, it is necessary to use a web/app server that is enabled for JAX-WS.Here is a list of suitable application servers which are Java EE 5 compatible (and thus JAX-WS enabled). Note that Tomcat does not yet work out-of-the-box: here are instructions to enable Tomcat for JAX-WS.

Even with the appropriate server, another aspect to consider is the generation of the JSR-109 deployment descriptors, especially as this is the major boon of JAX-WS. The wsgen tool (here) performs this task: it accepts a SEI and generates the required artifacts for deployment and invocation.

The reference implemenation (RI) for JAX-WS is located here. Here is a quick road-map regarding the RI:

Java 5's original annotation facility was not a solution, but a promise. Eventually, the solutions poured in for EJB3, JAXB and other communities within Java.

Now, JAX-WS brings the same power of development time metadata to the WS space, leveraging annotations and JAXB. Moreover, JSR 181 acts as a facade pattern for JAX-WS and brings remarkable simplicity for common WS tasks. Combined with the innate HTTP server in Java 6, WS developers finally enjoy simplicity and agility. The woeful cry of a "Java Simplification Request" may well soar into a joyful (if grammatically incorrect) cheer: "we never met a data we didn't like!"

The examples in this article use Java 1.6.0, and Ant 1.6.x. It is assumed that Java and Ant are installed on the machine. The first example is inspired by a blog post by Vivek Pandey.