In February 2009, Sun made an open call for small language changes that the Java™ development community would want to see in JDK 7. This set of changes is called Project Coin (based on the pun that coin means both "a piece of small change" and "to create a new language"). The idea was to solicit input for "5 or so" changes to the Java language from developers who will be involved in the implementation. The goal was to find safe, small, and useful changes on the scale of the Enhanced For Loop introduced in Java 5, not on the scale of Generics or closures.

Within a month, 70 proposals were submitted, and an open discussion on the coin-dev mailing list whittled the proposals down to a few that were compellingly useful without being risky.

This article is a description of the "5 or so" (actually 9 at this point) proposals that were accepted. Some of the changes have already been implemented in the JDK 7 codebase, but others are not yet available.

Five of the nine proposals were implemented for milestone M5 in November 2009, so you can use them now. The remaining proposals are due to be implemented by the feature-complete milestone M8, to be released in June 2010.

When developers are learning about Java's syntax, many are surprised that Strings cannot be used as selectors in switch statements, only primitive literals can. With this proposal, we gain this ability.

As with primitives, the case must still be a constant expression; the following will not compile:

This feature is no longer as important as it once might have been; now that Java has enumerated datatypes, many of the situations in which this might have been useful before Java 5 can now be better served through a well-designed Enum.

When Generics were added to Java, one nice feature was type inference: a developer often could skip specifying the type in the call to a method when the type is obvious from context. Unfortunately, this wasn't implemented for constructors:

Without inference, the right side of the first and second lines above would have been Arrays.(String)asList("foo", "bar") and Collections.(String)emptyList(), respectively. With inference, that verbosity is unnecessary because Java infers from the context that the type of the List is String (though technically, it is still optional and legal to include the type declaration). Unfortunately, that was not implemented for the last situation, which uses a constructor.

Because of this gap, many developers have created utility classes like com.google.common.collect.Lists to create objects without explicit type declarations:

Now, with the proposal implemented for Project Coin, com.google.common.collect.Lists is unnecessary, and the example can now be simplified to this:

"<>" is referred to as the diamond operator, used where Java can infer the type for a constructor (perhaps 90% of constructor type arguments, according to Project Coin leader Joseph Darcy). There was hope to be able to avoid the diamond operator completely, but eliminating it would have left no way to generate a raw ArrayList, and that would have broken backwards-compatibility.

This innovation does not seem very useful in the simple example above, but compare the following lines:

This is exactly the type of change Project Coin was looking for: small, safe, and useful.

How would you use Java to find the decimal value of the binary number 10100001? Unfortunately, the simplest way currently is this: int value = Integer.parseInt("10100001", 2). This approach has a number of problems:

We can now replace the problematic parsing code that introduced this section with this much simpler syntax: int value = 0b10100001. This approach is simpler to read (it's the same syntax as used in GCC C/C++ compilers, Ruby, and Python), quicker, can be inlined, can be used in switches, and will give a compile-time error if the letter "O" or "o" is used instead of the digit "0".

Fortunately, the Ruby language introduced an innovation that is being adopted in this Project Coin proposal. We now have the ability to place into our numbers underscores that the compiler will ignore. For example, int i = (1_5 + 10_5)/2_0; produces a value of 6 because the compiler sees it as int i = (15 + 105)/20;. More importantly, it means that we can process some formatted numbers without going through String parsing.

Underscores can also be used in non-decimal formats (even the new binary literal format), as seen in these examples from the original proposal:

JSR 292 is a larger set of changes in JDK 7 for "Supporting Dynamically Typed Languages on the Java™ Platform", and this proposal is mostly about adding a new java.dyn package for classes that will allow executing dynamically-typed languages through a new invokevirtual bytecode instruction. With its focus on bytecode support for dynamic languages, this proposal is really more for the Java platform than for the Java language. Since this article is focused on Java language changes, please see the original proposal for more information on these bytecode-level changes.

However, there is one change within the Java language that should be noted. In order to support invoking identifiers from languages that use different syntax, JDK 7 now allows "exotic identifiers". In addition to the other legal identifiers, Java now supports identifiers of the form#"name". So, this is now a legal method that prints 54:

Four of the accepted proposals have not been implemented in the public builds as of this writing. They are planned for a feature-complete milestone in June 2010. There is always a possibility that some of these will be pulled from JDK 7 before they are implemented.

In light of this uncertainty, the following sections are based on what was proposed, and they might not correspond to, or compile on, the actual implementations.

This proposal from Josh Bloch is intended to help Java developers dispose of resources more effectively. Until now, developers have had to manage resources manually, and this has proved to be ugly and error-prone. Even the most common "correct" idioms and example code is susceptible to leaks and failures. The essential problem is that closing resources in the finally block can itself throw an exception, and that new exception hides the original exception.

Here's a simple example to show the problem:

This example uses the very common approach of closing the resource in a finally block. Unfortunately, br.close() can throw an exception, so we should handle it, as in this example:

While this is a bit better, it's still problematic. Unfortunately, if both br.readLine() and br.close() throw an exception, then the second exception (which we probably don't care about) will be the one propagated. Here's the correct approach in JDK 6 and earlier to make sure the interesting exception is propagated:

This is a lot of extra code just to handle exceptions, and almost no one goes to this extreme. With Automatic Resource Management, this code will be simplified because we will be able to declare and initialize the Closeable resources within an expanded try statement that declares which resources will be closed automatically:

Technically, the above implementation could still leak, because the FileReader also needs to close. Fortunately, the new syntax will allow declaring in the try statement all the resources that will be automatically closed:

Automatic Resource Management will reduce error-prone boilerplate code, and it will enable replacing many finally blocks with syntactic sugar that handles resources correctly and automatically.

This proposal from Bob Lee removes a compiler warning that should never have been there in the first place.

When Varargs and Generics were introduced in Java 5, Varargs were implemented using arrays. Unfortunately, arrays cannot contain non-reifiable types (i.e., you can have a List[] but not a List[(String)]), so vararg methods have trouble when taking non-reifiable types. This problem comes up frequently when developers encounter a compiler warning when using Arrays.asList(...):

The first line doesn't have a problem because Strings do not take parameterized types, but the second line that uses List produces a compiler warning. This warning is based on the internal implementation of Arrays.asList(...). Frustratingly, there is nothing a developer can do to resolve the warning short of just not using that method.

In JDK 7, these warnings will go away, because Java will move the warnings from the caller of methods like Arrays.asList(...) to the implementations. This will eliminate thousands of unnecessary and annoying compiler warnings. None of this would have been necessary had Varargs been implemented using List, but it's too late to revert that now (though an additionalList-based version of Varargs could be added in the future).

This proposal from Josh Bloch adds support for immutable List, Set, and Map literals with syntax similar to that used for arrays.

Here is a snippet of the code necessary today to create immutable Lists, Sets, and Maps (ignoring utilities from libraries like Google Guava):

In JDK 7, all of that will be replaceable with this:

In parallel with the previous proposal comes this proposal from Shams Mahmood, which adds array-like indexing for List and Map objects. This is another small, safe, and useful improvement in the Java language that creates consistency among different access approaches.

To see this simplification in action, compare the following two methods. Note that the new approach also uses the new initializers introduced above.

In order to gain experience with the implemented features of Project Coin before JDK 7 is released (currently planned for September 2010), you will need to download one of the binary snapshots. For this document, I used the milestone M7, which was released on April 15, 2010. JDK 7 is intended to be feature-complete by milestone M8 in June 2010.

Though technically one can develop Java applications with nothing but the JDK, a simple text editor, and the command line, most of us prefer to use an IDE. Unfortunately, at the time of this writing, neither IDEA nor Eclipse provides full support for pre-release versions of JDK 7. Though both provide a source-level option for JDK 7, neither provides updated inline compilation or code completion for the new features.

Fortunately, NetBeans provides a pre-release version of their upcoming 6.9 release that provides full in-editor support for Project Coin features. To download this version, go to the NetBeans download site and select the 6.9 milestone download (6.9M1 at this writing). Make sure to set the project's "Source/Binary Format" to JDK 7 in order to use the implemented features: 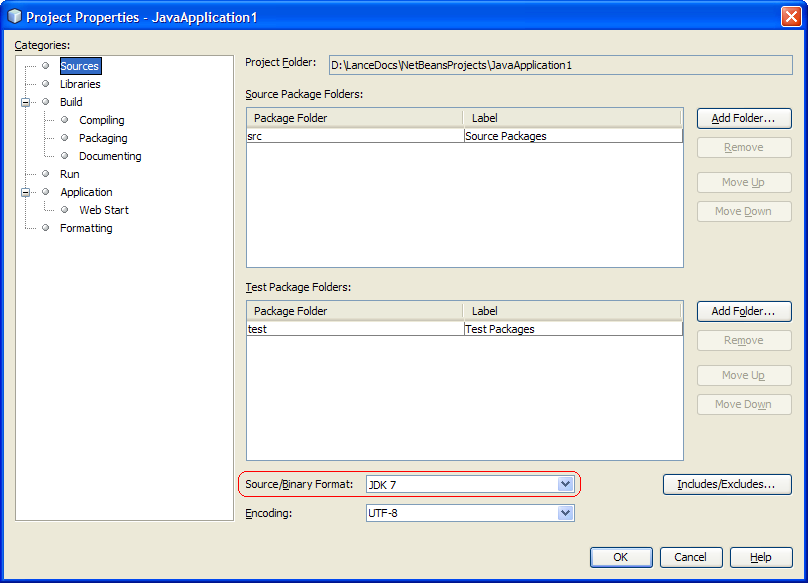 The small language changes accepted for Project Coin do not radically change the Java language; there is nothing here with the scope of Generics or Annotations. However, this are a collection of small and useful changes that continue the evolution of Java into a more concise and expressive language.

Not all of the new features demonstrated here are implemented, and even the ones that are might change before the final release. So,the final implementations may be different in detail when JDK 7 goes live. However, this article should be useful as a preview for the spirit of the new features.

The "open suggestion box" nature of Project Coin is a new approach for the stewards of the Java language, and I hope that it is repeated in future versions. Having developer-driven input to the language evolution will help Java continue to be relevant and enjoyable to use.