JavaFX is the next step in the evolution of Java as a rich client platform. Announced in 2007, JavaFX 1.0 was delivered in 2008 with a domain specific language for GUI construction called JavaFX Script as the entry point to the JavaFX runtime. A major shift in strategy away from the JavaFX Script language in favor of a set of plain Java APIs was announces in 2010 and delivered in 2011 as JavaFX 2.0. This move made JavaFX easily available to all Java programmers as well as programmers of other JVM languages such as Scala, Groovy, Clojure, and Jython. The JavaFX Script language was deemphasized by the JavaFX team at Oracle, but is picked up by the open source community under the new name Visage.

Since JavaFX 2.0, the JavaFX team has announced the intention to open source the JavaFX technology and indeed several subsystems, including the controls library, has already been contributed to the openjfx project under the OpenJDK umbrella project. It has further been announced that JavaFX technology will be integrated into the upcoming Java 8 release. As a consequence, JavaFX will become the focal point of rich client application development for the Java platform.

JavaFX 2.1 was released on April 26, 2012, just as I was reviewing the final draft of this article. This release brings in Max OS X as a supported operating system for JavaFX. This release coincides with the release of JDK 7 Update 4, which also added Max OS X support. What is more, the JavaFX 2.1 SDK is included in the JDK 7 Update 4 installation for both Windows and Mac OS X.

Key innovations of the JavaFX technology include its hardware accelerated graphics system, its media support, its properties and bindings framework, its HTML5 support through the Webkit based WebEngine and WebView, and its animation framework. Most of these are well covered in the JavaFX online documentation, the two books on JavaFX 2.x so far—JavaFX 2.0 Introduction by Example by Carl Dea, and Pro JavaFX 2 by James Weaver, myself, Stephen Chin, Dean Iverson and Johan Vos—and the popular JavaFX blogs.

In this short article, I will explore an area of JavaFX 2.x that is not as well covered as the other popular features such as the properties and bindings framework or the animation framework, but nevertheless is just as fascinating and is capable of creating beautiful visual displays. This area is JavaFX 3D scenes. I will show you JavaFX 3D scenes in action through a series of simple examples. And along the way I will explain some of the other JavaFX features I employed in the examples, including the use of the JavaFX 2.x builders, properties and bindings, and animations.

Setting Up a JavaFX 2 Development Environment

The development environment for JavaFX 2.x consists of a supported operating system, the JDK, the JavaFX SDK, and a Java IDE. Windows is supported since JavaFX 2.0. Mac OS X support is added in the just released JavaFX 2.1. Linux support is available as a developer preview in JavaFX 2.1 and 2.2, and will go GA in JavaFX 2.2 later in 2012.

My setup for writing this article is a Mac mini running Mac OS X Lion, JDK 1.6.0_31 for Mac OS X, JavaFX 2.2 SDK developer preview build b04, and IntelliJ IDEA 11.1.1. I setup a normal Java project in the IDE and add the JavaFX runtime jar, found in rt/lib/jfxrt.jar under the JavaFX SDK installation directory, as a dependency. After the JDK 7 Update 4 and JavaFX 2.1 release, I tested all the programs in JDK 7 Update 4 and everything worked. With JDK 7 Update 4, you don't need a separate JavaFX download.

To verify that my environment works, I compiled and ran the following small program: 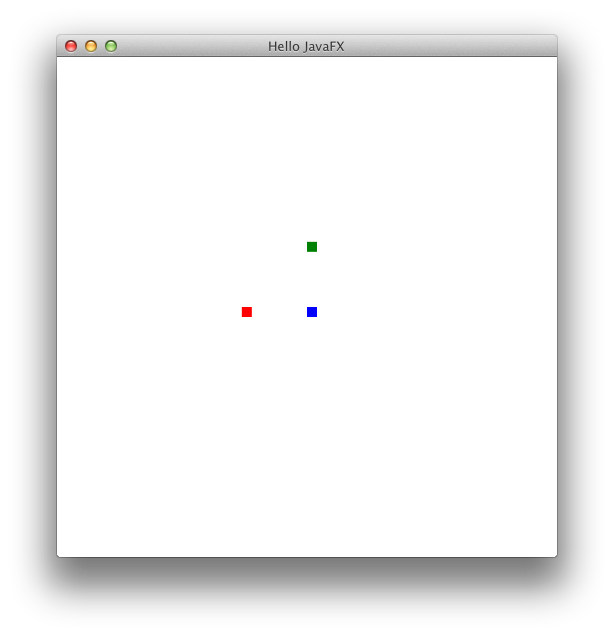 Before I point out which line of code uses 3D features of JavaFX, let me briefly explain some basic JavaFX application code idioms.

is equivalent to the "normal" code

The builder code is more concise and is more descriptive than normal code, especially code that calls a constructor with unnamed parameters.
Properties
JavaFX properties and bindings framework is the most fun part of JavaFX code. It allows a property of one object to be bound to another property somewhere else so that whenever the latter changes, the former is notified and, at the appropriate time, updated.
Animation
JavaFX supports key frame animations, which allows you to specify the value of a property at certain specified time points. The JavaFX animation framework interpolates the values of the property at intermediate times.

For readers who ask "Where is the 3D code?" It's this line:

"But the blue rectangle did not move at all. And the scene definitely looks two-dimensional." It looks two-dimensional because of two things: we are looking at the scene in the z-axis direction, and we are using a parallel camera. Every scene has a camera. It defaults to a parallel camera, which renders objects at the same size regardless of its distance from the viewer. Let's put a PerspectiveCamera on the scene:

Even though the blue rectangle still only occupies the center of the screen, its size does change from larger to smaller as its z coordinate is translated from -250 to 250. Since under a perspective camera, nearer object looks bigger, we can conclude that the positive z-axis direction is pointing into the screen and away from the viewer. Together with the observation that the red rectangle animates from the left of the window towards the right of the window, and that the green rectangle animates from the top of the window towards the bottom of the window, we infer the orientation of the coordinate system to be: x increases from left to right, y increases from top to bottom, and z increases from closer to the viewer to further away from the viewer. This gives us a right-hand orientation of the three-dimensional space: if you stretch out the first three fingers of your right hand, and point your thumb along the positive x-axis and your index finger along the positive y-axis, then your middle finger points to the positive z-axis.

If you do not see the changing size of the blue rectangle after adding a perspective camera to the scene, the graphics card on your computer may not be one supported by JavaFX. This line of code:

Without any further transforms, all JavaFX on screen objects such as controls and shapes fall on the xy-plane where the z coordinate is 0. Normally, these objects are drawn in the order in which they are put into the scene, and later added objects will obscure earlier added ones. 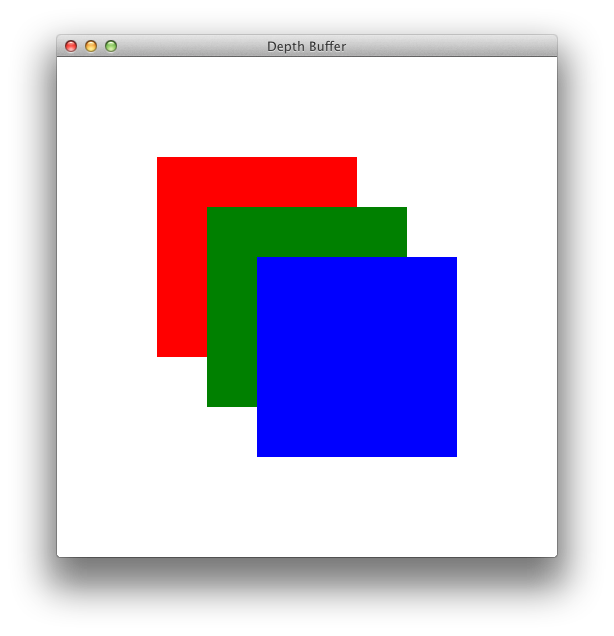 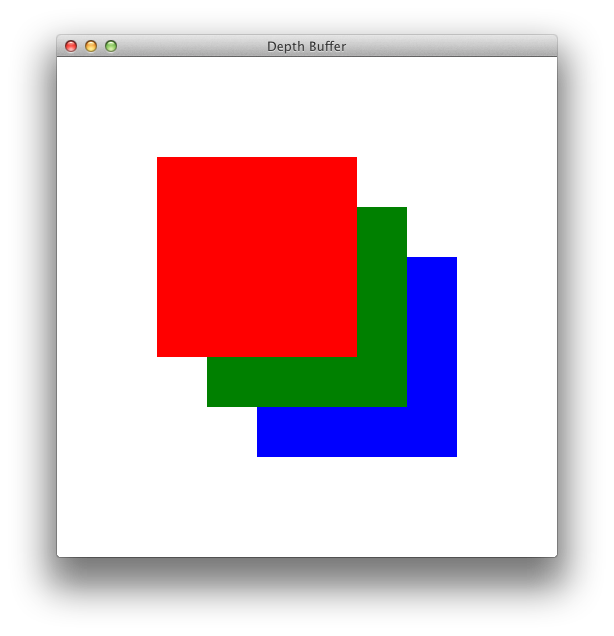 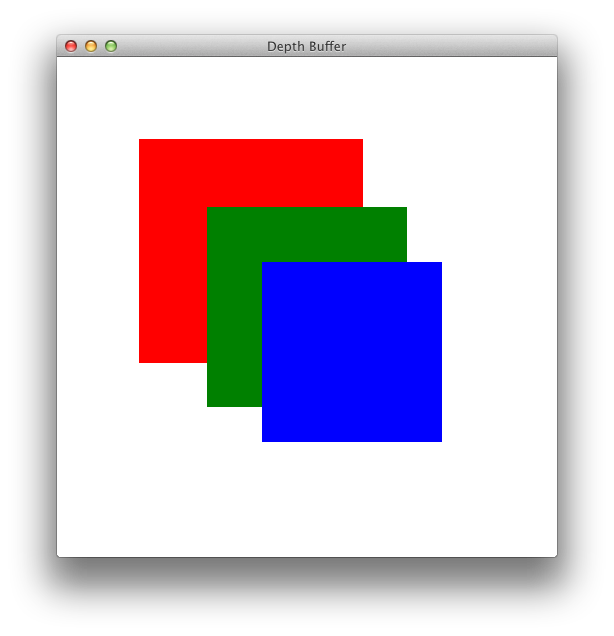 It is easy enough to enable the depth buffer on the scene: 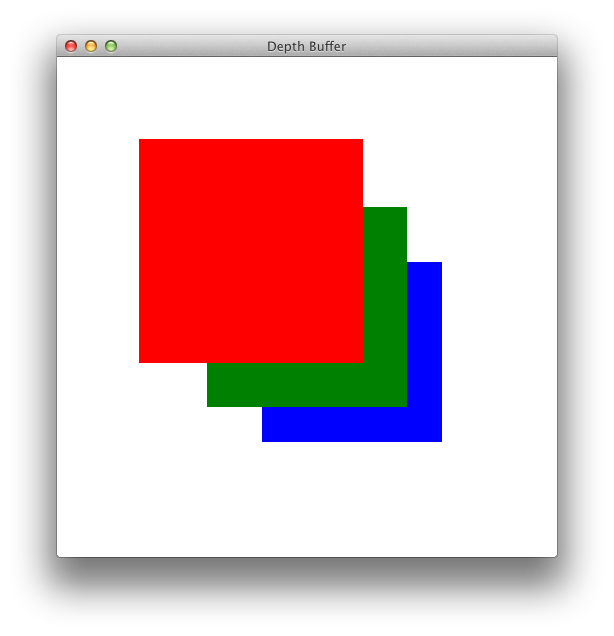 Now the scene looks realistic. We can animate the z coordinates of the three rectangles so that their z-ordering changes during the animation to see one rectangle jumps in front another. To do that, we add property fields to the class:

trigger the animation from the start(Stage) method:

bind the translateZProperty's of the rectangles to the property fields:

and implement the animate() method:

As I mentioned earlier, the power of JavaFX's 3D scenes comes from its 3D transforms. JavaFX's transforms consist of the most general Affine transform, and four special case transforms: Translate, Scale, Rotate, and Shear. You have seen plenty of Translate's in the last section. They move objects in a particular direction. Scale expands or contracts an object by an factor. Both Translate's and Scale's are easy to imagine.

Here is an example of a Rotate transform:

This Rotate transform will cause the object it is applied to to rotate around the x-axis by 60°.

The experiment of this section is a slight modification of the experiment from the last section. I have changed the colored rectangles into colored circles to stop you from being bored. I have also added a Rotate transform that is applied to the root, which is a Group that contains all three circles. This causes them to be rotated as a combined unit. I have added another property that is used to animate the rotation.

Build and run the program and you will see the animation that you saw in the last section, compounded with a rotation of the whole scene around the x-axis. The motion of the objects is like the wheel of a car that is driving towards you. Dodge!

We can change the axis of the Rotate transform to that of the y-axis, represented by the directional vector (0, 1, 0):

This time the rotation will be around the y-axis. As a matter of fact, the Rotate class has constants X_AXIS, Y_AXIS, and Z_AXIS that you can use in this situation. The above snippet of code is equivalent to:

Notice that in the midst of all the animated translations and rotation the depth buffer worked flawlessly. Objects closer to us always obscure objects further away, never the other way around.

All the experiments that you have seen so far feels a little bit "flat." And that is because the three rectangles or the three circles that we dealt with are all parallel to each other. Rotate them about different axis, and they will form the surface of a 3D looking solid. Here's a cube, obtained from six squares each of a different color and each of which undergoes a different transform. In the beginning, all six sides were at the same position, but one by one, the side animates to their final position in the cube:

Did you see it? Well, you can see the cube forming as it happens. But because of the viewing angle is directly over the cube, when the animation is done, all you see is the last face of the cube. To cure this dullness, we add a Rotate transform to the root of the scene graph and animate its angle as we form the cube. First we add a property:

Then we add a Rotate transform to root, binding its angleProperty to the property defined above:

Finally, we add rootRotate into the animation mix:

Build and run the program and you will see the forming of the cube more clearly. If you have never done this sort of programs before, you have to admit it's pretty cool.

Using the same trick from the last section we can construct the other Platonic solids. I'll show you a tetrahedron. The only difference between the tetrahedron and the cube is that instead of using six squares, we use four equilateral triangles, and instead of rotating the squares out by 90°, we rotate the triangles out by 70.53°—the dihedral angle of the tetrahedron.

There are a few more JavaFX features that interact well with 3D scenes. Lighting is an effect that can be applied to any Node. When applied to 3D objects, the effect is more dramatic.

Each JavaFX Node knows its bounds. As a matter of fact, each Node knows three bounds:boundsInLocal, boundsInParent, and layoutBounds. The boundsInLocal takes into account only the geometry of the Node, but not any transforms. The boundsInParent does take into account of transforms. For example, the local bounds of a rectangle is just the rectangle itself. If you don't apply any transforms, the parent bounds is the same as the local bounds. However, if you do apply transforms, say, a Rotate of 45°, then the parent bounds will become bigger to accommodate the slanted rectangle. When a Node contains 3D objects, its bounds are also 3 dimensional.

As you can see from the experiments I made in this article, JavaFX 2.x contains easy to use facilities for building simple 3D scenes that can be used to produce quite interesting results. Although not everyone will be doing 3D scenes in JavaFX, many of JavaFX's other facilities are just as fun to use.

With JavaFX slated to be open sourced and to be tightly integrated with the JDK and JRE, it makes a lot of sense to familiarize your self with the JavaFX technologies, and have some fun while exploring them.

I would like to thank Stephen Chin, Carl Dea, and Brian Coyner for their help in reviewing this article.