OpenDDS is an open-source implementation of the DDS standard created and supported by OCI. OpenDDS includes bindings for C++ and Java, and bindings for JavaScript and .NET-based languages, such as C#, are provided via add-ons.

Unlike low-level transport protocols, DDS implementations like OpenDDS are aware of the schema and semantics of the data. The Industrial Internet Consortium Connectivity Framework defines a stack model consisting of multiple layers.

Many alternatives to DDS provide only the Transport Layer, requiring each application to provide its own solutions to the concerns of the Framework Layer.

DDS applications share data across a network. Without the features defined by the DDS Security specification, this data is sent in the clear. This limits non-secure DDS to closed networks or to networks that provide security outside the application space, such as VPNs.

To broaden the applicability of DDS, the OMG developed the DDS Security specification.

With DDS Security, now available in OpenDDS, applications take advantage of configurable data protection for both infrastructure- and application-generated messages. Data can be protected by signing, (i.e., data is sent in the clear, but with a signature to prevent modification), or to accommodate more stringent data protection requirements, data can be encrypted.

This article makes use of a few terms that are defined by the DDS specification.

A Topic is a unique name that, along with a data type, logically links the publishing and subscribing parts of a distributed application.

For example, a Topic named "Sensor" could be used by applications that publish sensor readings, as well as those that subscribe in order to display sensor data on a user interface.

Publishers and Subscribers are created by a DomainParticipant, which is the top-level object that each application creates to access a DDS Domain.

A Domain is represented as an integer and logically partitions DDS traffic – no DDS communications will cross from one domain to another.

HOW DOES DDS SECURITY FIT IN?

Architecturally this is similar to HTTPS, however DDS's RTPS protocol with Security runs over UDP and supports multicast (including encryption).

By analogy, DDS Security is to plain DDS as HTTPS is to HTTP.

OpenDDS includes these implementations, but developers could also write their own alternative implementations. This article assumes an application is using the built-in plugins.

Application identities are determined by Certificates signed by a common Certificate Authority. The identity principal is the Domain Participant. Mutual authentication of peers and key agreement is achieved using industry-standard Digital Signature and Diffie-Hellman algorithms.

Configuration files, which must be signed by the Certificate Authority to prevent tampering, determine which applications have access (read and/or write) to which topics. The configuration files use two different XML schemas, each defined by the DDS Security specification:

Cryptographic operations provide data protection via Message Authentication and/or Encryption. Each topic may be configured so that its data samples will be encrypted, signed, or sent without protection.

The scope of data protection is also configurable; it can apply to the payload only or it can include the headers added by DDS.

As an example, consider an Industrial Internet of Things (IIoT) application wherein a network of sensors measure valve pressure on pneumatic manifolds. The software embedded in these devices contains the Publishers while the Subscriber is a web-based UI that collects and displays the sensor readings.

A recorded screencast video of such an application is available from OCI.

When configured for DDS Security, all network messages sent and received by OpenDDS use the RTPS protocol over UDP. Each UDP datagram contains a single RTPS Message. Each RTPS Message consists of a fixed header followed by some number of Submessages (often more than one).

There are a few different types of Submessages that are relevant for DDS Security:

More than one of these protection levels can be active concurrently, which would mean that data that's already encrypted/signed could be encrypted/signed again. This can be desirable in certain use cases but should be avoided in general.

ADDING SECURITY TO A DDS APPLICATION

DDS Security can be applied to existing OpenDDS applications by modifying their configuration and updating some Quality of Service (QoS) settings. Although this article only contains an overview, details of these changes are documented in the OpenDDS Developer's Guide and Using DDS Security in OpenDDS documents.

The following files are needed when using DDS Security.

Example file names are used below; the actual names are arbitrary.

The files ending in .pem can be generated by OpenSSL or other compatible tools. They are for the PKI (Certificate Authorities, Certificates, Private Keys) and are not specific to DDS.

The files ending in .p7s are PKCS#7 signed documents. The input to the signing process is an XML file defined by the DDS Security specification. The OpenSSL command-line tool can be used to sign documents.

The DDS Security specification introduces a new DomainParticipant QoS policy called property that allows arbitrary name/value pairs to be passed from the application to the DDS internals when a Domain Participant is created. This QoS policy is used to give OpenDDS the names and locations of the files described above (using the example file names from that section).

The example below is in C++, but the relevant code is similar in the other supported languages.

The overall configuration mechanism is shown in the diagram below.

A portion of the Governance XML file used by the demo described above is shown here:

A portion of the Permissions XML file used by the demo described above is shown here:

In the running system with DDS Security, each of the three plugins has its own responsibilities. Together they enforce the security aspects such as authorization, confidentiality, and tamper-resistance.

As an extension of DDS Discovery, Security-enabled peers mutually authenticate using a digital signature algorithm. Each pair of participants completes a 3-way handshake that includes exchanging Certificates and Permissions files.

If authentication succeeds, the Diffie-Hellman key agreement algorithm ensures that each peer has the same "shared secret," which was not sent over the network. 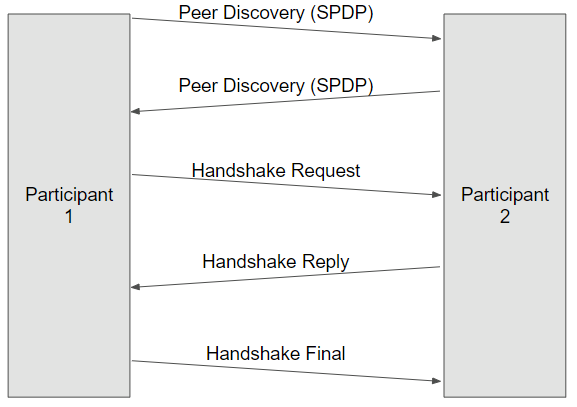 The access control plugin provides details of domain-wide configuration (Governance) to the rest of the DDS system. The plugin also checks that actions undertaken by the local participant (such as creating a DataReader) are allowed by its Permissions.

The permissions claimed by a peer are validated by checking the XML document's signature.

The cryptographic plugin has three roles: 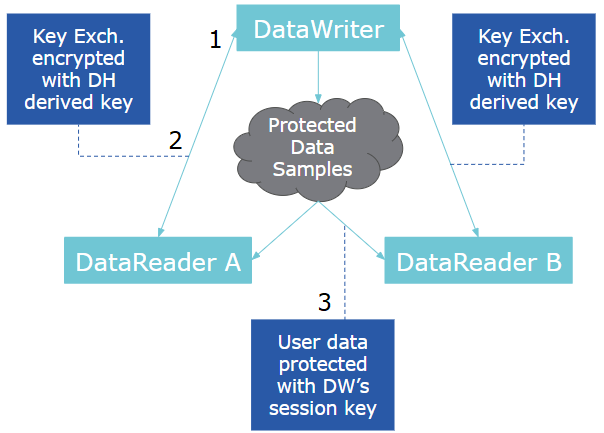 The way keys are used in DDS Security allows a given DataWriter to encrypt a data sample once and send it to more than one DataReader, which may happen with multicast. This maintains the scalability and real-time nature of DDS even with encryption.

OpenDDS is a completely open-source solution for real-time distributed applications.

OpenDDS's flexible QoS-based configuration and decoupling of publishers and subscribers has proven to meet the requirements of many types of applications. Now with DDS Security, OpenDDS is applicable to even more domains and network deployments, providing protection from unauthorized publication/subscription, tampering/replay, and access to data.

You can learn more about OpenDDS at opendds.org, the source code repository, and OCI's OpenDDS product page.

Please see the other articles about OpenDDS, and both the OpenDDS Developer's Guide and Using DDS Security in OpenDDS on the documentation page.

Screencasts and webinar recordings are available on the links page.

Bringing Multicast to the Cloud for Interoperable DDS Applications

Hiding The Middleware from Your Domain Code with Camel