The JGroups API gives developers easy access to reliable group communication capabilities. This article gives an overview of how to build collaborative fault tolerance by using JGroups to implement portions of the Object Group pattern. The information is based on the experience of writing a Java application that simulates collaborative system failures. Excerpts from that application are used to illustrate key concepts.

In collaborative systems, otherwise autonomous computing nodes cooperate to achieve a common task that would not be possible with any individual node acting alone. Examples include intelligent transport systems, military command and control systems and autonomous manufacturing systems. Although the exact definition of a collaborative system can vary depending on context, this article will focus on three defining characteristics:

Figure 1 is an example of a collaborative system. It shows a network of environmental sensor stations. The nodes in the network are autonomous and spatially distributed across the region shown. Each sensor is capable of recording and reporting its local environmental conditions without the help of any of the other sensor stations.

The communication links between the sensor stations are decentralized and dynamic. Sensors can enter and leave the network at anytime. Every station is wirelessly connected to every other station, so no single sensor failure can disrupt the overall network connectivity. 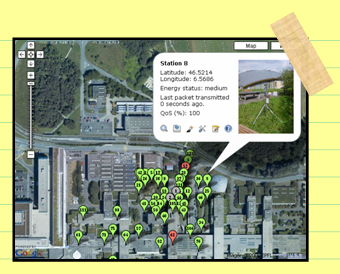 Collaborative systems have special failure characteristics beyond the typical failures of other software systems. In systems with large numbers of nodes, node failures are common. Internal exceptions will cause nodes to become unresponsive in the network. Dynamic network connections, especially wireless links, are prone to temporal or permanent interruptions. These interruptions not only decrease the functionality of the collaborative system, but may also lead to the corruption of individual node states.

For example, sensor stations are exposed to adverse weather, are knocked over and broken easily, and can be expected to run out of power. Anything (people, cars, animals) passing between the line of sight of two sensor stations can cause a temporary loss of communication. If this happens at the right time, a controller in a region may miss a sensor update and become out of touch with the current conditions in the region.

JGroups is toolkit of Java APIs for reliable group communication. Developers can use JGroups to join a group, send messages to group members, and receive messages from group members. JGroups communication infrastructure keeps track of the members in every group and updates group members when changes occur -- new members join, existing members leave or crash.

As shown in Figure 2, the JGroups architecture consists of three main parts: (1) the Channel API used to establish communication links, (2) building blocks that group channel functionality into higher-level abstractions and (3) the protocol stack that handles network communication for a given channel. 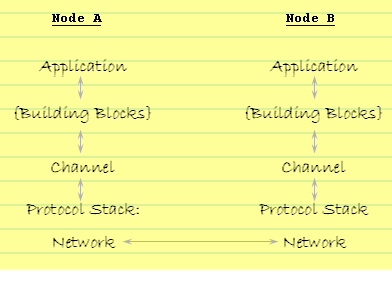 A process has to create a channel to join a group. The channel is the handle to the group. Clients that want to connect to multiple groups have to create multiple channels. The programming interface for channels is simple and primitive. Building blocks (a more sophisticated interface into a channel) saves the application programmer from having to write tedious, repetitive code. The protocol stack manages the details of sending and receiving messages over the IP network.

Figure 3 shows the logical structure of software developed to simulate the behavior of nodes in a collaborative system. A simulation engine (not shown here) launches GroupNodes, each with its own threads of execution. Each node gets its ability to collaborate through an association with a CommStrategy object. The CommStrategy has an association back to its GroupNode in case the GroupNode needs to be notified of events from the CommStrategy. 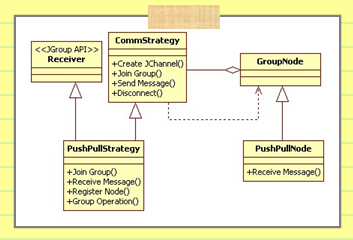 Participants in a collaborative network need the ability to let other nodes know when they fail and to detect the failures of the other nodes. For example, suppose that, in the collaborative system shown in Figure 1, rain water leaks into the waterproofing of one of the sensors. The sensor shorts and is unable to perform normally.

In this scenario, controllers that rely on that sensor for regular updates will have to be notified of the failure. The sensor is responsible for letting controllers know that it has failed, but if the sensor is sufficiently damaged, the controllers may have to find out about the error by some other means.

The following code is an excerpt from a Java application that simulates collaborative system failures. It shows how the PushPullNode uses the JGroups API to detect distributed failures. For the sake of brevity, the error handling code is not shown. In some cases, the details of a function are replaced with general comments.

The PushPullStrategy extends the CommStrategy. When the PushPullNode creates a PushPullStrategy, the CommStrategy constructor creates a new channel and sets the channel.SUSPECT property to TRUE. The channel.SUSPECT property allows the channel to automatically notify the PushPullNode when any member of its group is suspected of failing. Nodes in a group are suspect when, after a period of time, they fail to respond to health monitoring messages. Both the suspect notification and the node monitoring are provided by the JGroups infrastructure and are transparent to the application developer.

For the network shown in Figure 1, fault tolerant communication between two sensors (A and B) can be simulated using two PushPullNodes. Both sensor PushPullNodes join the same group using the same groupName. If sensor A fails, but is still able to notify other members of that failure, it calls this.CommStrategy.sendMessage(). JGroups calls sensor B's PushPullStrategy.receive(), alerting sensor B of the failure.

If sensor A's error is so severe that it becomes completely unresponsive, JGroups calls the suspect function of sensor B. Sensor B's suspect function checks the view for details about which member is suspected and the nature of the failure. See the JGroups User Manual for more details about the information available in a view.

The most basic strategy for mitigating failures is to keep back-up copies of data or services and use them when a failure occurs. An Object Group uses replicated state to ensure continuity in the event of a failure. Although Object Groups can provide failure times much faster than simply using backups, programming them from scratch can be a daunting task.

The JGroups API makes it very easy to implement the Object Group pattern. The following code extends the CommStrategy and PushPullStrategy to include support for Object Groups.

Adding Object-Group style support to the PushPullNode using JGroups took only a very small amount of additional code. The new operations added are CommStrategy.groupOperation(), PushPullStrategy.getState() and PushPullStrategy.setState(). The CommStrategy.groupOperation() is a general representation of what would normally be domain-specific functionality. For example, in the sensor network shown in figure 1, the group operation might be getZoneTemp() instead.

For the network shown in Figure 1, a controller, sensor A and sensor B could be simulated using PushPullNodes. Sensors A and B join the same group representing a physical zone. The controller relies on both sensor A and sensor B to report temperature for a given region. The controller doesn't care which sensor it uses as long as at least one of them is always available. Figure 4 shows the interactions that occur during a group operation.

Figure 4: Collaborations in a Group Operation. 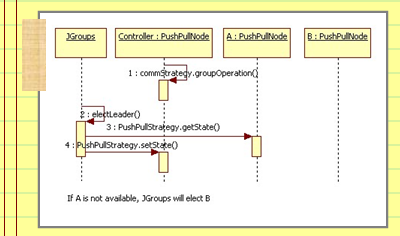 When the controller wants a temperature reading from the zone, it joins the zone's group and calls this.commstrategy.groupOperation(). JGroups elects a leader (by default based on membership length) within the group and calls getState() on that node (let's assume that sensor A was chosen).

Complicated group management functions were provided to the programmer implicitly by the JGroups API, and the leadership election and failover is completely transparent to the controller's programmer.

JGroups actually works. It was a straightforward task to use APIs for the multicasting and group management functions needed for collaborative fault tolerance. JGroups has several extensibility features, not mentioned in this article, that allow you to do things like write your own communication protocol or overwrite the default settings of the original protocol.

Unfortunately, some of the examples in the API manual were outdated, and several of the API operations were deprecated. In the course of writing the simulation software, it took some trial and error to compensate for information missing from the manual.

At the time this article was written, JGroups was used in a number of commercial applications. JBoss uses JGroups to provide clustering features for its Java application servers. JGroups is also used by FactoryPMI to provide connection redundancy and load balancing for industrial control systems.