The NetBeans Platform allows rapid construction of an application that has some advanced capabilities, including templates, undo/redo, auto update, and more. It is an alternative to Eclipse Platform for those that wish to use standard Java Swing user interface instead of the Eclipse SWT user interface. The NetBeans Platform grew organically from the lessons learned about application architecture learned by the NetBeans IDE development team. Some of those lessons included the need to isolate the various parts of the application into "Modules" and the need to organize user interface items of interest into a hierarchy of "Nodes".

NetBeans vs IntelliJ notion of a Module

NetBeans defines a module as a cohesive chunk of code or a 3rd-party library with carefully defined dependencies and available public packages. IntelliJ defines a module similarly, but without the ability to identify certain packages as internal only. This means that you will sometimes have the IntelliJ IDE able to compile the application, but NetBeans Platform will refuse to run it because one module is accessing a non-public package of another module. Another reason IntelliJ IDE will compile the application but it won't run is because the module dependencies are not set up properly. This means that IntelliJ has one module accessing a class in another module without the necessary configuration in NetBeans to have it work.

To illustrate, we will use NetBeans Platform 7.3 Quick Start to quickly create a NetBeans Platform Application using NetBeans. The result of following along with the example is a NetBeans 7.3 Platform Application called "Word Processor" with five modules: WordEditorCore, WordEditorAPI, UppercaseFilter, LowercaseFilter, and WordHistory. We will use IntelliJ IDEA 12.1.4 for the illustrations. IntelliJ IDEA is free and open source. 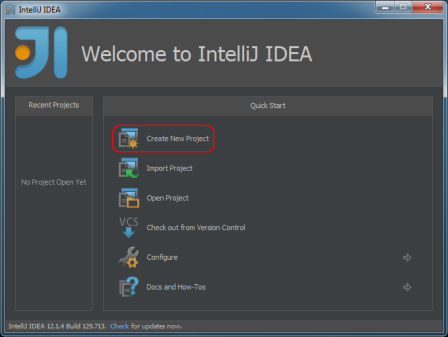 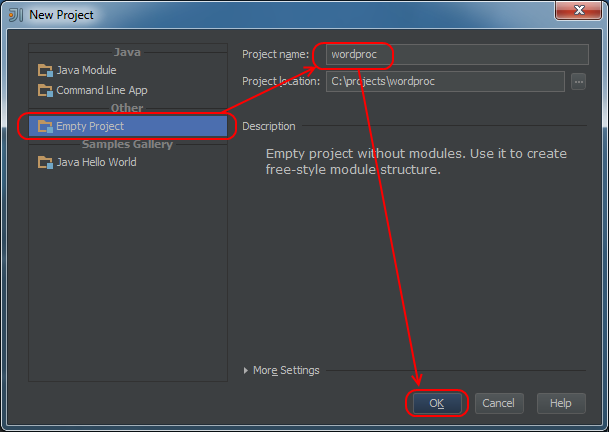 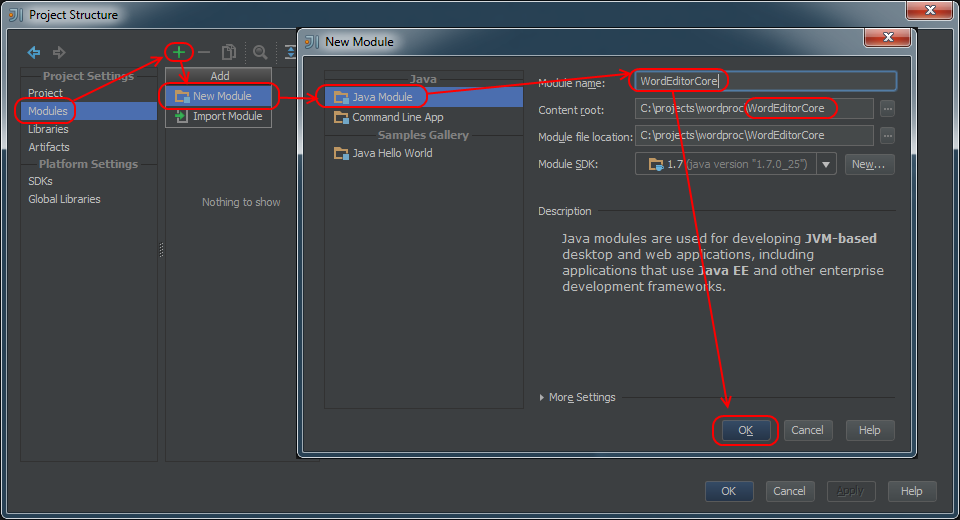 In figure 4 when we configure the module, we exclude the build directory. This prevents IntelliJ from overwriting compile outputs created by Ant or NetBeans. 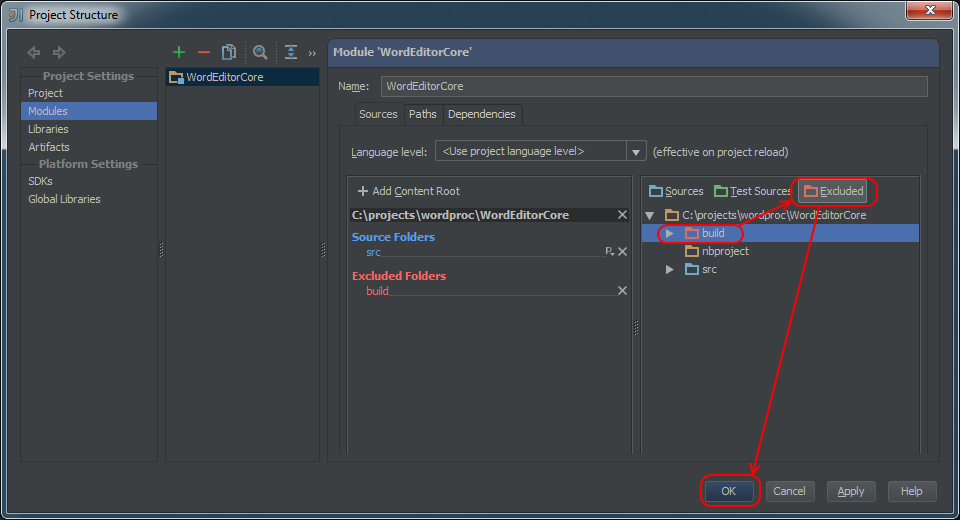 Repeat the processes in Figures 3 and 4 for the remaining four modules: WordEditorAPI, UppercaseFilter, LowercaseFilter, and WordHistory. Figure 5 shows what the dialog looks like when done. We now have one IntelliJ module for each NetBeans module in our project. 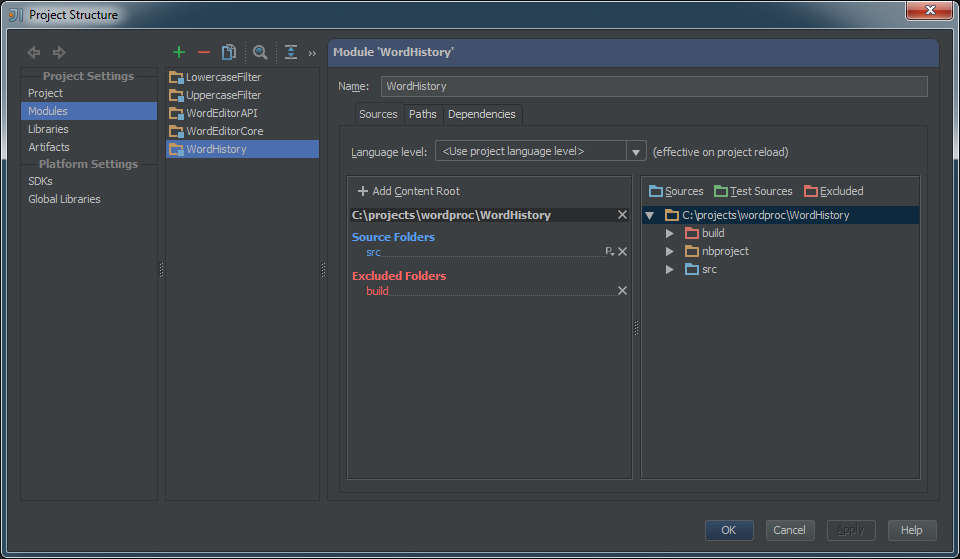 Now attempt to build the project in IntelliJ idea. 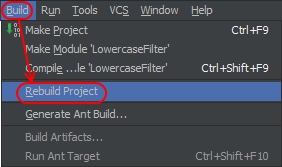 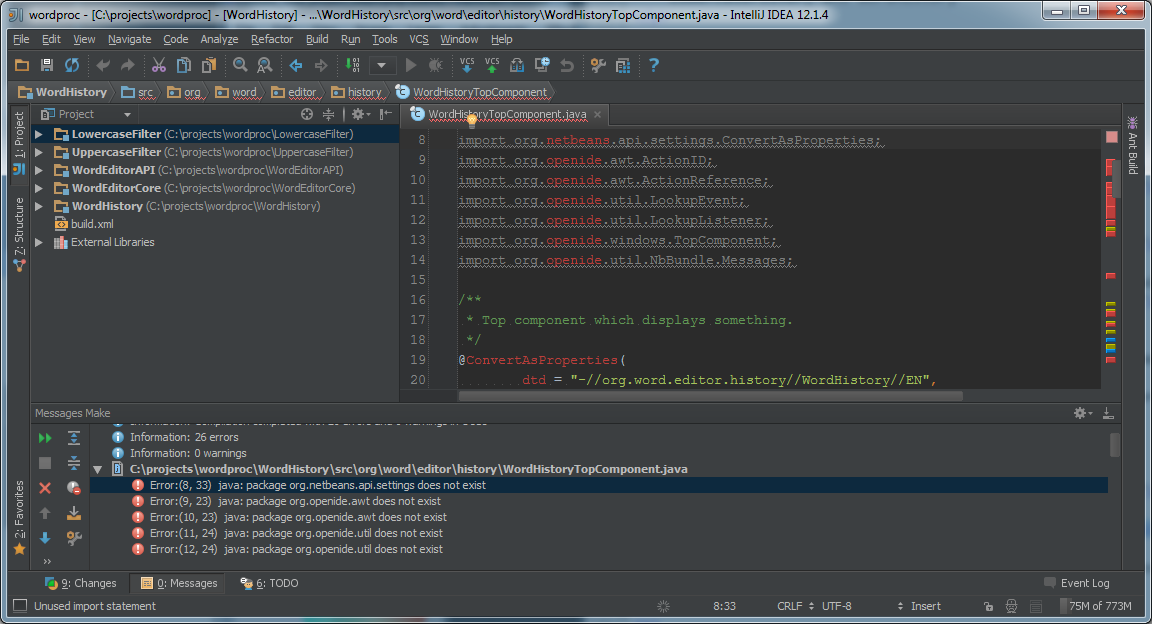 Observe that IntelliJ doesn't know anything about the NetBeans Platform. How does the NetBeans build system know where to find the supporting jar files? The answer is in a file called $wordproc\nbproject\private\platform-private.properties. The variable $wordproc is the directory containing your word processor example program. On the author's system, this is c:\wordproc. It contains one line:

Opening that file reveals two lines at the end: 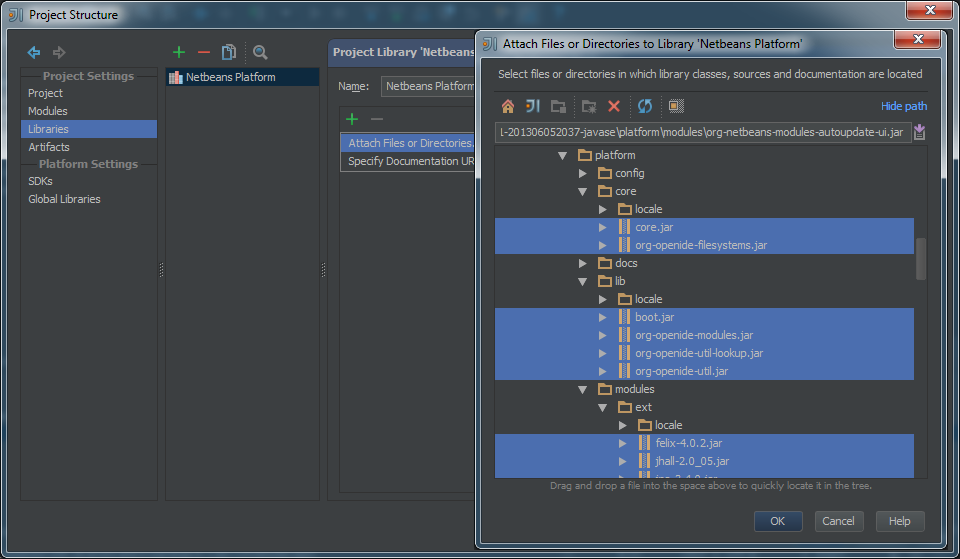 Once the IntelliJ library called "NetBeans Platform" is created, we need to add it as a dependency of the IntelliJ modules in our application. 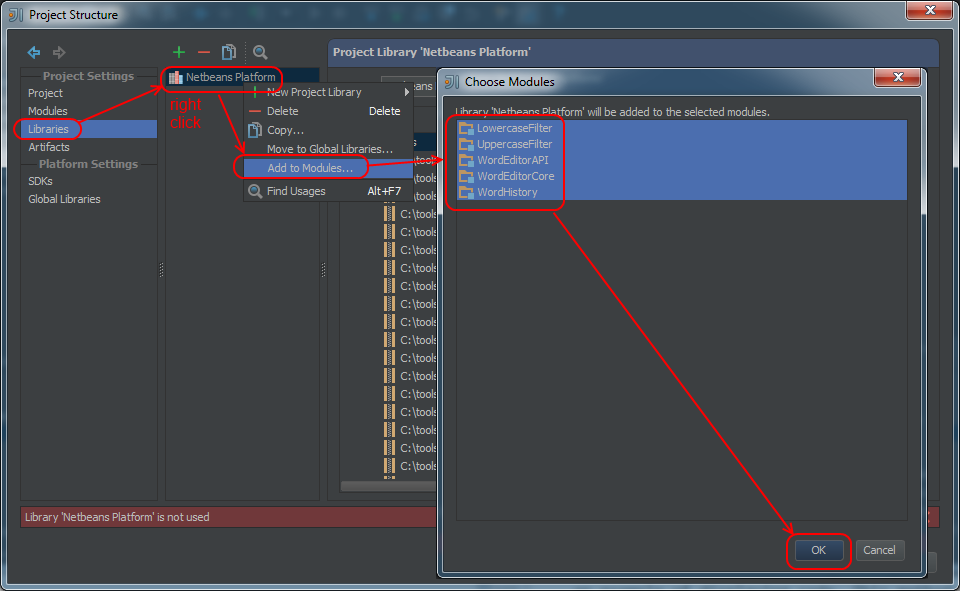 After we have added the dependencies, we can rebuild the project. We have fewer compilation problems now, but we are still unhappy, as shown in the next figure.

It turns out that the NetBeans Platform example makes use of compile time annotations. These annotations generate code as part of the compile step. We must tell IntelliJ to go ahead and run the annotations and place them in a spot where we can see the generated code from our IDE. 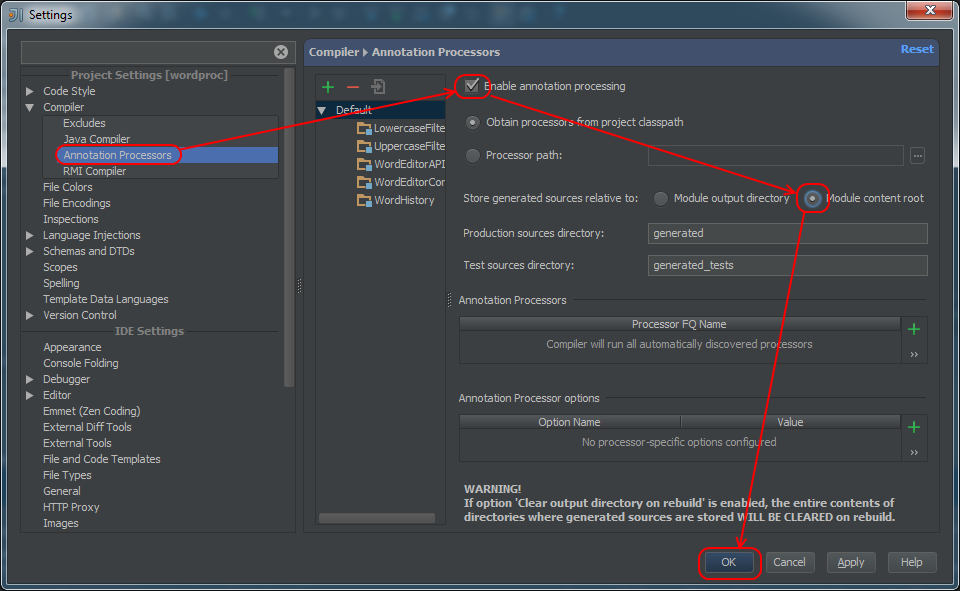 After we have enabled annotation processing, we can rebuild the project. We have fewer compilation problems now, but we have yet more configuration to set up, as is shown in the next figure. 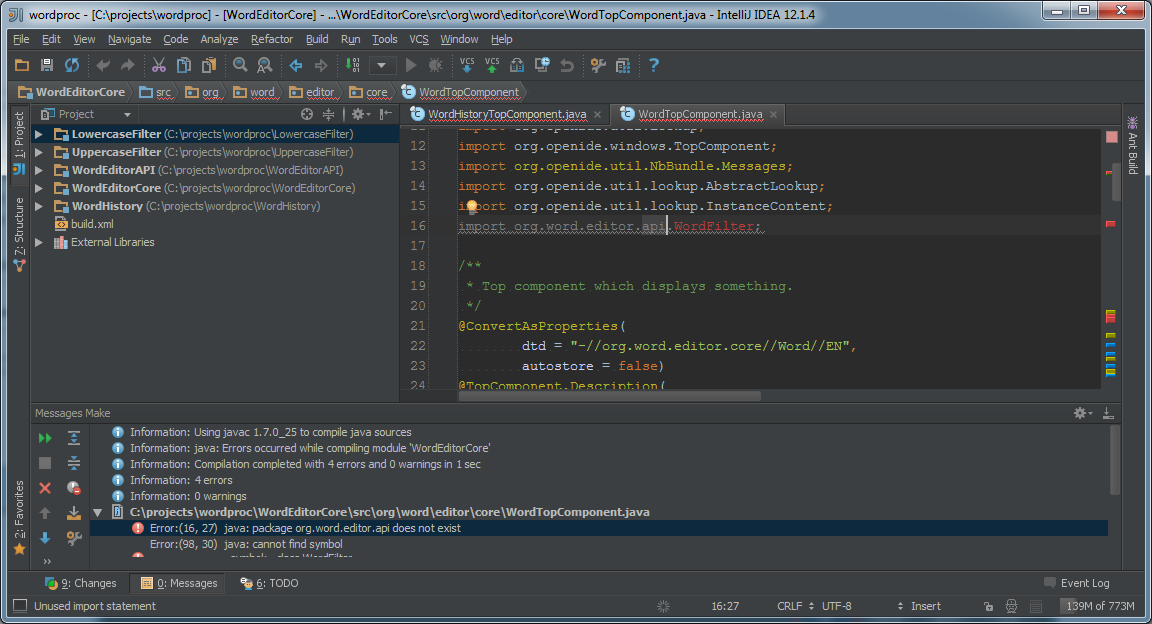 The IntelliJ module WordEditorCore cannot find the package org.word.editor.api. That package is inside the WordEditorAPI module. We need to add this dependency. 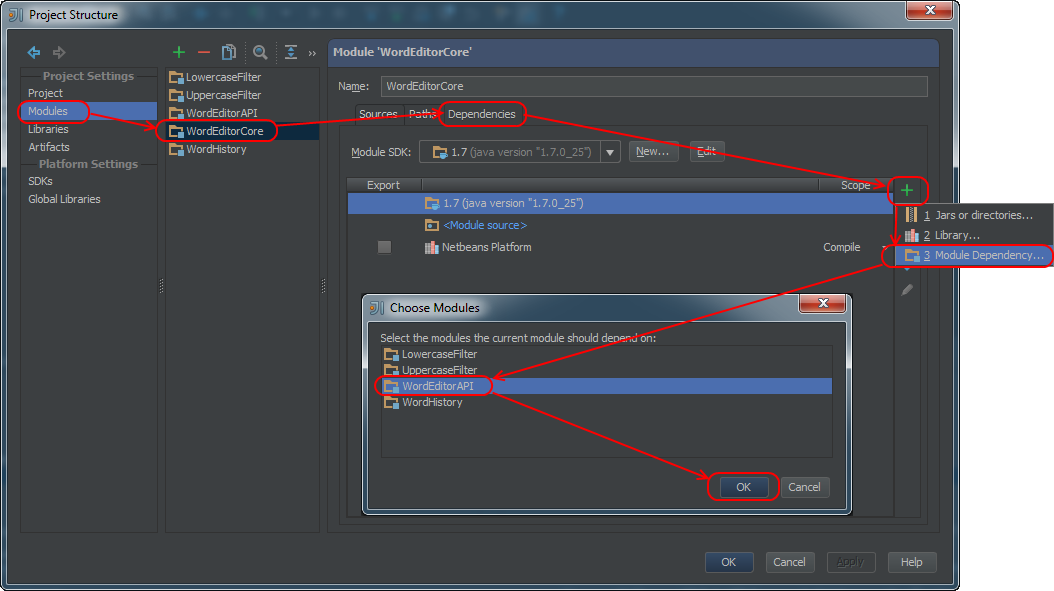 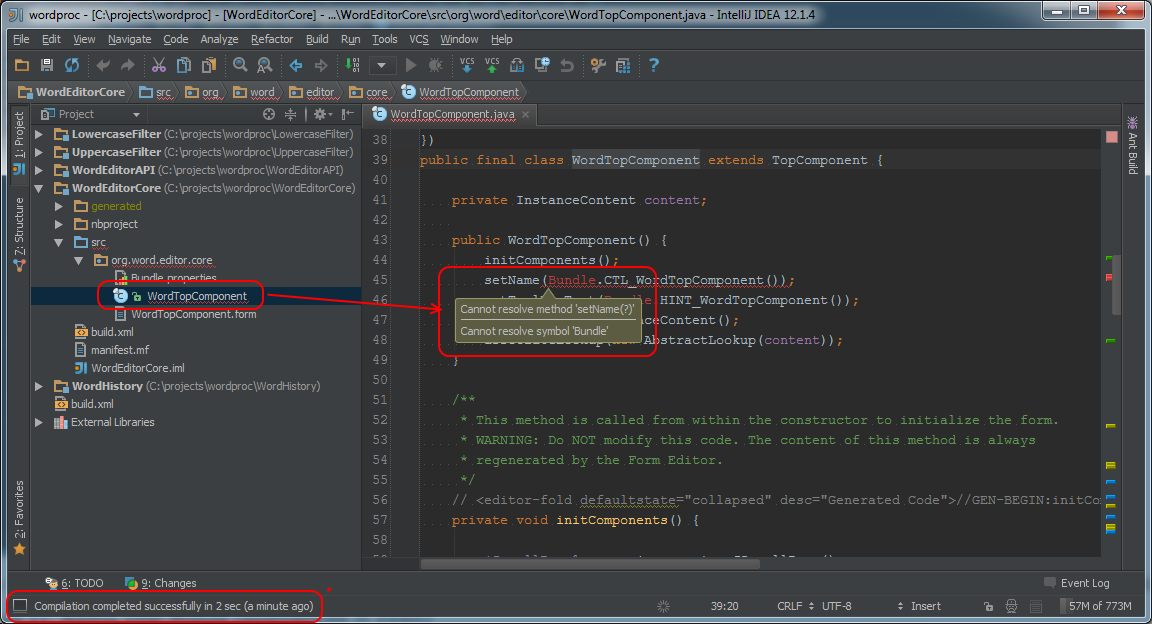 While we do obtain a clean compilation, we still need to instruct IntelliJ where the location of the generated source code is so that we can navigate to it in the editor. For each of the five modules we will identify the "generated" subdirectory as a location of source code. The compilation is clean yet the red squiggly underline in WordTopComponent.java shows that the configuration is still incomplete. 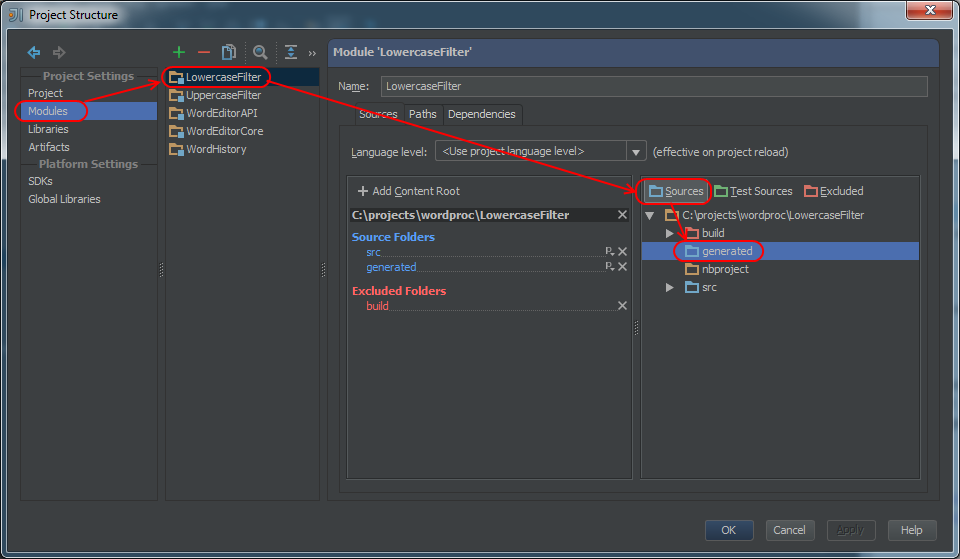 Observe that IntelliJ can now cleanly compile and navigate to the generated source code of the application.

It is possible to develop a custom launcher program that will launch the NetBeans platform without the necessity to run either the NetBeans IDE or ANT-based NetBeans build system. In the absence of such a launcher program, launch your application using ANT and connect to it using a remote debugging profile. First, you will need to create a remote debugging run configuration in IntelliJ. 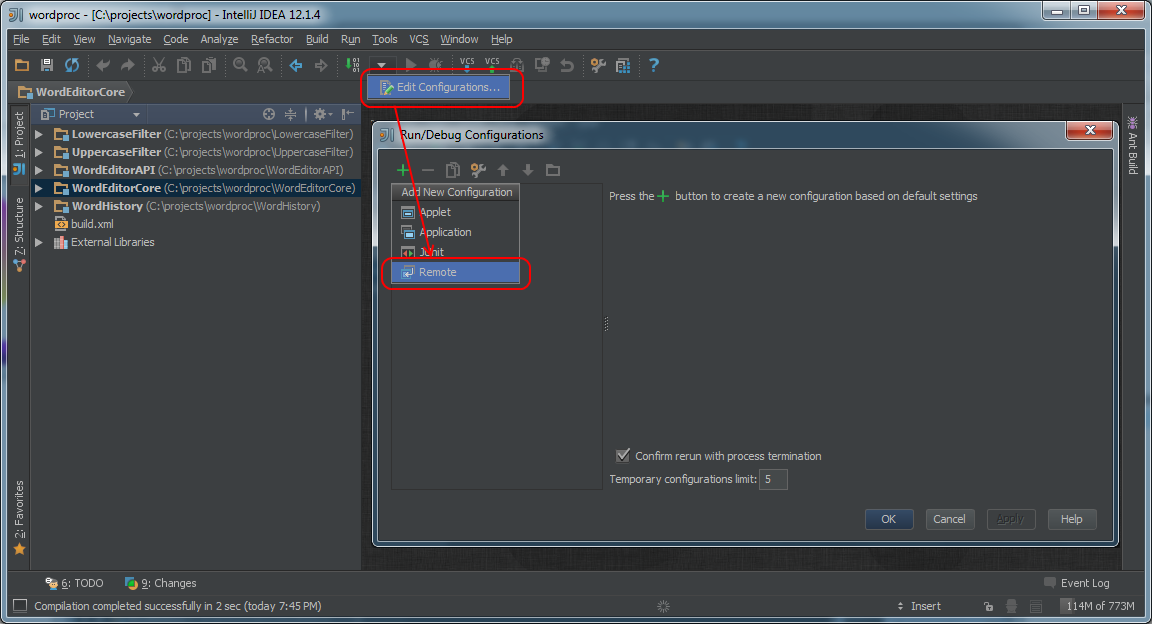 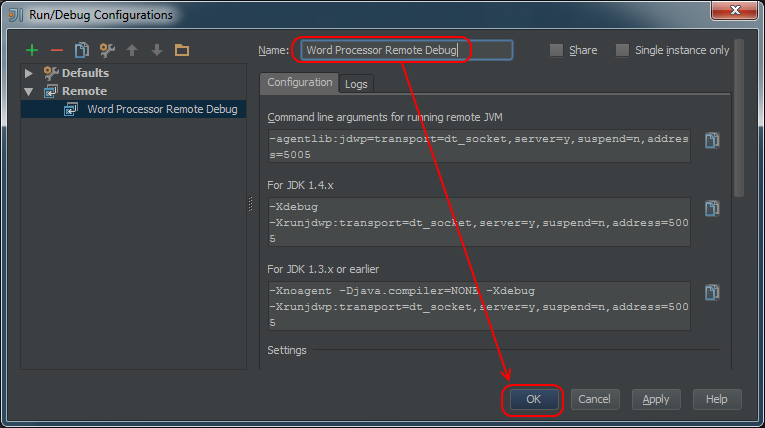 If a module A depends upon a module B in the NetBeans universe, then the same should be true in the IntelliJ universe. The same is true the other way. If you are editing code in IntelliJ and you add a dependency between two modules, you need to make an analogous change in your NetBeans module dependencies. This can be done by hand in the modules' nbproject/project.xml file for the modules in question or using the NetBeans IDE in the normal way.

Failure to add new packages to the list of public packages in a module.

If you add a new package to a module that you would like to be visible within other packages, you need to edit the modules' nbproject/project.xml in the element to include that package. Note that this is necessary because IntelliJ does not have the ability to restrict visibility at the package level. This is a NetBeans capability that is enforced by the NetBeans Platform runtime.