CORBA clients and servers can be used on a variety of computer systems ranging from small devices such as embedded systems and handheld computers to large mainframes. Typically, on smaller computers CORBA is used to support clients. Because of the memory constraints of these smaller systems it is often necessary to identify ways to reduce the memory footprint of the client code. Likewise, larger systems are typically used for running CORBA-based servers. Even though there may be a large amount of memory, if a large system runs a number of servers supporting a large number of IDL operations then the memory may be stressed in this situation too. This news brief looks at some techniques that can be used to minimize the memory footprint of clients and servers written in C++ that use CORBA.

Application-specific servant code will not be considered here. Instead, the focus is on the size of the object code that is created by running the C++ compiler against the code generated by the IDL compiler. The size is defined here as the sum of the data and text (or code) sections of the object code. Note that the size(1) command is used to obtain this information, not ls(1).

Version 1.2a of the ORB TAO, available from www.theaceorb.com, is used as the example ORB in the sections that follow. The C++ code is compiled using GNU C++ 3.2 on Pentium III computer running Linux. Some of the conclusions of course may be different if another ORB is used instead of TAO.

If you are using TAO's shared libraries then the footprint reduction steps given here can be used along with the Shared Library Reduction Tool under development by OCI. This tool analyzes what code in TAO's shared libraries is needed by a set of applications you provide. It then constructs a makefile that builds a version of the ACE and TAO shared libraries that contain only the code needed for these applications. More information about this tool can be found in directory apps/sorereduce included in the TAO distribution.

The IDL compiler supplied with your ORB may provide options that have an impact on memory footprint. For example, TAO's IDL compiler accepts a number of options to fine-tune the generated C++ code. There may be a run-time performance impact with using options that reduce footprint, therefore you should gauge the performance of your client or server code when using these options if run-time responsiveness is of critical concern.

Below are some of the options that can impact memory footprint are listed. A complete description of all the options can be found in the TAO's Developer's Guide [1].

This section looks at the footprint impact of using some of the types and constructs available in the Interface Definition Language. Everyone wants a reduced footprint, but in many cases not at the cost of reduced functionality. The goals of footprint reduction need to be carefully weighted against possible reduced functionality when making IDL changes such as those mentioned in this section.

It is illustrative to look at the code generated by simply defining an empty CORBA interface:

For client-side support, the IDL compiler must generate class Empty_var which acts as a smart pointer to an Empty (see section 6.19 of [2] for a discussion of _var classes). Also generated is Empty_out, used support passing _var objects as out parameters (section 7.14.3 of [2] discusses the purpose of _out parameters). Finally, the proxy class Empty is generated. Each proxy class must provide member functions for duplicating and narrowing object references, and forward each request to the server. Each ORB implementation is allowed to create additional classes to support the proxy class.

Using the versions of TAO and the GNU C++ compiler mentioned in the Introduction, the footprint of the IDL generated client-side code is 15KB.

On the server-side, the IDL compiler must generate the skeleton class from which your servant will derive from. The skeleton code is involved in the dispatching of each request to the appropriate servant member function. As is the case for client-side generated code, the IDL compiler is free to define additional member functions and classes as needed.

The resulting size for the client-side code is 48KB and 96KB for the server-side code.

Now suppose a struct is used to hold the name contents:

By using the struct the client-size footprint is reduced by 23%. This is because the reduction by two of attribute set/get operations more than offset to additional code need to support passing a NameStruct. On the server-side footprint is reduced by 26%. The additional reduction is due to less dispatching functions being needed because a pair of set/get operations has been eliminated.

In this case introducing a struct for the person's name makes sense since in most cases both the first and last name will be queried together instead of separately. Introducing structs that contain loosely coupled elements solely for footprint reduction reasons should be avoided if possible.

Note that the use of a struct in this case has versioning implications. For example, in the original Contact interface that doesn't use a struct, if a middleName attribute is added, existing client code can be used without modification (of course middleName will not be available to these clients). However, if the NameStruct is modified to include middleName then client code must be recompiled to pick up this change, even if middleName is not used by these clients. This should be kept in mind when deciding whether to use struct to replace one or more operations.

A one-dimensional CORBA array is semantically similar to a CORBA bounded sequence. An array maps to a C++ array whereas a sequence maps to a non-trivial class, so some memory saving may be obtained by using an array instead of a sequence.

To assess the footprint saving of an array instead of a sequence, consider the following IDL file:

The footprint for this is 32KB for client-side code and 58KB for server-side code.

Now compare with using an array:

The footprint for client code and server code is reduced by 10% and 5% respectively. There are run-time performance implications in using an array over a bounded sequence (see section 4.7.7 of [2] for a good comparison between sequence and array). For example, the whole array is sent over the wire whereas only the populated entries in a sequence is sent over the wire.

Finally, we compare the memory usage of using a CORBA union and not using a union:

The footprint for this is 31KB for client-side code and 58KB for server-side code.

Next we will avoid "overloading" the function and instead provide two separate functions:

Now the memory usage has increased by 7% for the client code and 15% for the server code. This is due to the extra proxy function and extra skeleton dispatching code included by introducing a new operation. This percent increase in footprint size will only get larger as more members are added to the union.

Some drawbacks to using unions are that the construction of the C++ object corresponding to the union must be done properly and there must be code equivalent to a switch statement to process the C++ union object.

Footprint Reduction on the Client-side Only

If you are primarily concerned about reducing the footprint for client code, another option is available. This involves applying the Interface Segregation Principle [3]. This states that "fat" interfaces (large interfaces whose operations are not cohesive) should be avoided. Instead, separate, smaller interfaces should be available for the client to choose from in order to obtain the services of interest.

As an example of applying the ISP, suppose a large interface exists:

A collection of smaller interfaces could be defined with each interface providing a front end to a group of operations from FullService:

If most clients do not need to administer FullService objects then they can work with just a reference to a Service object instead. Doing so can reduce the client footprint.

There are a number of ways for servers to implement this separation of operations into different interfaces. A few of these techniques are discussed here. These techniques involve having separate servants for implementing FullService, ServiceAdmin, and Service. These servants are shown in the following UML diagram. The convention used here is that for CORBA a interface named Interface the corresponding C++ servant is named Interface_i. 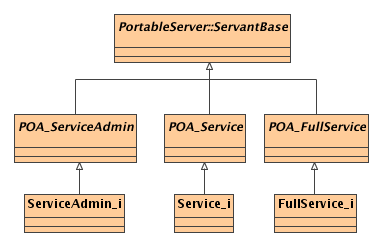 Use an Object Reference for Operation Delegation

As an example, a candidate for applying the ISP is the OMG's Trading Service IDL file [4]. The Trading Service IDL file, which is included in TAO, contains over 500 IDL statements. Much of this related to administrative/configuration tasks or advanced features that may not be needed by most clients in a particular deployment scenario. For the version of TAO and GNU C++ compiler mentioned in the introduction The client footprint is close to 1MB. We'll examine ways to reduce the footprint for clients that do not need all the functionality provided by such large IDL files.

Use a FullService_i Reference for Operation Delegation

This design is similar to the previous design except the servants ServiceAdmin_i and Service_i have a reference to a FullService_i object. This requires that all three servants be running in the same process. This approach offers better performance than the previous design since the delegation is done through a virtual C++ call instead of through a remote CORBA invocation. However, it does require modification to the server running FullService_i. In this design the relationship between these servants looks like: 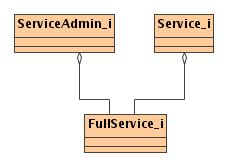 FullService_i Delegates to other Servants

Finally, a third design is given that is similar to the second design except the delegation is "reversed": TheFullService_i object delegates to ServiceAdmin_i and Service_i. The main advantage of this approach is that is aids maintenance of the servant code. It may be tempting to try to use multiple inheritance instead of delegation, but this is not possible because FullService_i must inherit from POA_FullService generated the IDL compiler.

Although the FullService_i interface may be fat, the implementation can be fairly "skinny" since it is using delegation for all of its operations. The drawback to the approach is that it would require major modification to any existing FullService_i code. The relationship among the servants is as follows:

This news brief has shown ways to reduce the memory footprint of code generated by a CORBA IDL compiler. This includes selecting IDL compiler options carefully, favoring certain IDL constructs over others where appropriate, and hiding large interfaces behind smaller, more cohesive interfaces. By learning the characteristics of your IDL compiler and applying the above steps you can increase the likelihood of being able to use the power and portability of CORBA under constrained memory conditions.