Request Processing Aspects of CORBA and TAO (Part 1 of 2)

CORBA ORBs are used in software systems that span a variety of problem domains including finance and banking, telecommunications network provisioning and maintenance, media collection and dissemination, aerospace, and defense [http://www.corba.org/success.htm]. Consequently, CORBA ORBs [formal/02-12-06] are subject to wide-ranging performance requirements, used in sequential as well as concurrent processing scenarios, and deployed on many different platforms. To be successful across such a broad range of applications, an ORB must provide some means of tailoring its behavior to a software application's specific requirements. Controlling how CORBA requests are processed is one way in which an ORB can be aligned to meet an application's needs.

Processing a CORBA request can be generalized as a two-step process:

The CORBA specification defines the POA's threading models, the policy used to specify a POA's applicable threading model, and the ORB's thread-related interfaces. The specification does not, however, define the strategies an ORB may use when assigning requests to threads or the mechanisms for choosing a strategy or combination of strategies that fulfill a specific application's requirements. All in all, the specification provides only a narrow treatment of these issues leaving much to the ORB implementer's discretion.

Other factors may also influence or constrain request processing strategies:

This is the first of two articles that address request processing aspects of CORBA and TAO. [The ACE ORB (TAO) is a standard-compliant CORBA ORB developed and maintained by the Distributed Object Computing Group (DOC Group) and commercially supported by OCI.] This article focuses on an ORB's thread-related operations and the POA's threading models as set forth by the CORBA specification. TAO's implementation of the standard, its most frequently used threading and concurrency strategies, and other commonly-used strategies that govern its request dispatching behaviors are the subjects of the second article. TAO's implementation is largely based upon software patterns that have emerged from distributed system and distributed real-time embedded (DRE) system research in recent years. The Related Topics section contains references to material that presents several software patterns of particular interest to readers wanting to understand or examine TAO's implementation. Some readers, especially those involved in DRE system development, may find the Real-Time CORBA Specification's (formal/02-08-02) threading and concurrent processing capabilities useful. (TAO includes a RT CORBA implementation, but that is beyond the scope of these articles.)

The ORB's thread-related operations are used to:

The relevant portions of the ORB's interface definition are:

ORB::run() provides a thread to the ORB. In appropriate circumstances, this operation can be called from multiple threads to provide more than one thread to an ORB. This is a blocking operation from the application's perspective. Each thread that calls ORB::run() becomes dedicated to the ORB. ORB::run() does not return until the ORB has shut down.

An ORB continues its normal processing tasks while it is shutting down so there may be a significant delay, after ORB::shutdown() is called, before the ORB actually stops processing. For this reason, some implementations may allow an application to specify a time limit for the shutdown operation. If the ORB has not shut down gracefully within the allotted time, the ORB may then conduct a forced shutdown.

Some common scenarios are:

Here are some options for shutting down a CORBA-based application:

A CORBA request is processed in two stages:

Strategies employed by a multi-threaded ORB as it receives and dispatches requests determine the extent to which requests may be processed concurrently. These strategies are usually described as a ratio between threads and requests, e.g.:

Each strategy has its strengths and weaknesses, which motivates understanding an application's request processing characteristics to choose the most appropriate strategy or combination of strategies. A complete discussion of request dispatching strategies is beyond the scope of these articles. The remainder of this article is devoted to the POA's threading models. The followup article describes important aspects of TAO's request dispatching capabilities. (For additional information regarding threading and concurrency strategies, see the Related Topics section at the end of this article.)

The POA threading models establish concurrency constraints that are imposed during request processing in a multi-threaded environment. These constraints further qualify the extent to which CORBA requests may be processed concurrently.

A single-threaded POA constrains request processing such that concurrent upcalls shall not occur at the POA level, even in multi-threaded environments. 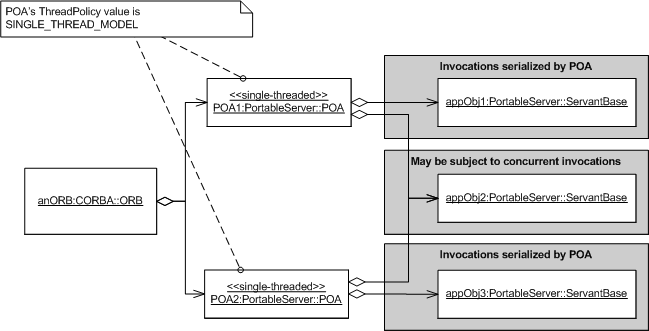 Activating an application object with multiple POAs is not recommended.

A POA's threading model is determined by its ThreadPolicy. The default ThreadPolicy value is ORB_CTRL_MODEL. A POA's ThreadPolicy, like all other POA policies, can be assigned only when the POA is created.

The relevant portions of the PortableServer module and the POA's interface are:

The following code fragment demonstrates how to create a single-threaded POA:

The following scenarios might motivate use of the ORB-controlled threading model for a CORBA-based application that is subject to concurrent requests:

The ORB-controlled model might also be appropriate when the ORB offers a serialized request dispatching strategy that out-performs single-threaded or main-threaded POAs.

The single-threaded model is appropriate when:

This model imposes the most stringent constraints upon an application and likely reduces a multi-threaded ORB's efficiency. Application developers may want to compare performance of this threading model with that of a single-threaded ORB before committing to this model.

Chapter 21 of Advanced CORBA Programming with C++ [ISBN: 0201379279] by Michi Henning and Steve Vinoski discusses issues associated with multi-threaded applications. This text was written to be compliant with an earlier version of the specification (the current version is 3.0) but the authors' treatment of these issues is relevant to contemporary applications.

Pattern-Oriented Software Architecture, Volume 2 [ISBN: 0-471-60695-2] by Douglas Schmidt, Michael Stal, Hans Rohnert, and Frank Buschmann presents many architectural patterns that are relevant to the topics discussed in these articles. Although these patterns are not presented in the context of a CORBA ORB, they respond to the forces that affect an ORB and are therefore applicable to ORB implementations. In many cases, an ORB is cited among the known uses of these patterns. The Reactor pattern (pg. 179) defines an architecture that is used for demultiplexing and dispatching network events. The Half-Sync/Half-Async pattern (pg. 423) defines a competing architecture for demultiplexing and dispatching network events. The Leader/Follower pattern (pg. 447) defines a means of managing a thread pool suitable for use within an ORB. The Active Object pattern (pg. 369) defines a technique suitable for implementing a thread-per-connection strategy.

This article examined aspects of CORBA request processing related to threading and concurrent processing as set forth by the CORBA specification. The material presented here discusses the ORB's thread-related operations and their use as well as the definition and use of the POA's threading models. Guidelines are offered to help developers consider an application's requirements and choose strategies that will fulfill those requirements. The followup article describes TAO's request-processing strategies and its implementation of the ORB's thread-related operations.