This article will look at each of these abstractions, discuss the motivation for using the new I/O (NIO) APIs, and examine the performance characteristics of an NIO enhanced log parsing application.

Why use the New I/O APIs

There are several motivating reasons to start using the NIO APIs:

Buffers are designed to be an efficient mechanism for storing and manipulating primitive data types.

Buffers can also be declared as direct, which attempts to make use of the operating system's native I/O mechanisms. Direct buffers can be very efficient at moving and copying data because the Java VM is not involved. Since direct buffers have higher allocation and de-allocation costs than non-direct, you should use direct buffers for large, long-lived buffers.

It is also possible to map a region of a file directly into memory using a MappedByteBuffer. This can provide significant performance gains for certain types of applications.

A buffer has a position, limit, and capacity.

When a new buffer is instantiated, the position is zero and the limit is set equal to the capacity.

As data is written to the buffer (e.g., from a socket or a file), the position is incremented.

Once data has been inserted into a buffer, it cannot read it until the position is moved back.

Use the flip() method to set the limit to the current position and reset the position to the start of the buffer.

A call to get() will return the three bytes between position and limit.

There are other methods to change the position and limit attributes.

A character set provides adapters (decoders and encoders) for translating between a sequence of bytes and 16-bit Unicode characters.

The Charset class is a factory of decoders and encoders for a named character set (e.g., US-ASCII, ISO-8859-1, UTF-8, etc.). A decoder transforms bytes in a specific charset into characters, and an encoder transforms characters into bytes.

The Charset class also provides encode and decode convenience methods, which simply delegate the request to a coder.

A channel is a new abstraction that represents an open connection to an entity capable of performing I/O operations, such as files and sockets.

A channel is either open or closed. They are intended to be safe for multithreaded access.

The I/O-capable classes (FileInputStream, FileOutputStream, Socket, ServerSocket, etc.) in the existing java.io package have been modified to return the underlying channel.

There are two categories of channel:

All channels implement the Channel interface. 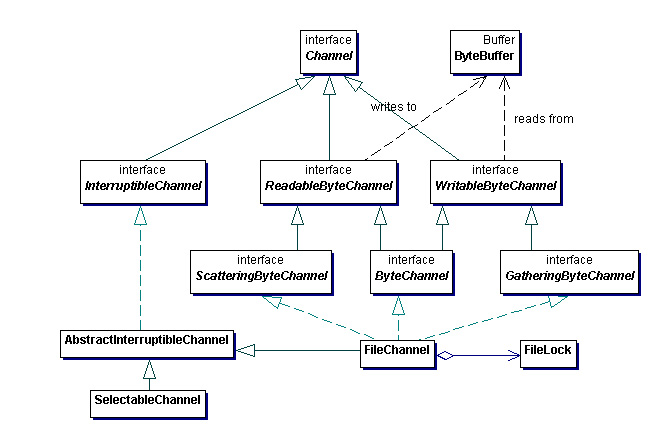 File channels support reading and writing to the underlying file.

FileChannel implements the scattering, gathering, and byte channel interfaces and is interruptible. Since FileChannels are not selectable (see Selectable Channels), they cannot be used for non-blocking I/O. They do support some advanced features that were previously only available to C programmers:

Multiplexed, non-blocking I/O is possible by using selectable channels and selectors. This type of I/O is more scalable and efficient than the standard thread-oriented, blocking I/O.

Traditionally, to serve multiple client connections, a thread is allocated for each connection. This solution wastes system resources, since threads are expensive to create and manage, and, in this case, tend to wait on I/O most of time.

When using a selector and any number of non-blocking channels (each representing a client connection), a single thread can handle all incoming requests. In this model, long running transactions can degrade quality of service. When this is an issue, a pool of worker threads can be used to handle simultaneous requests. 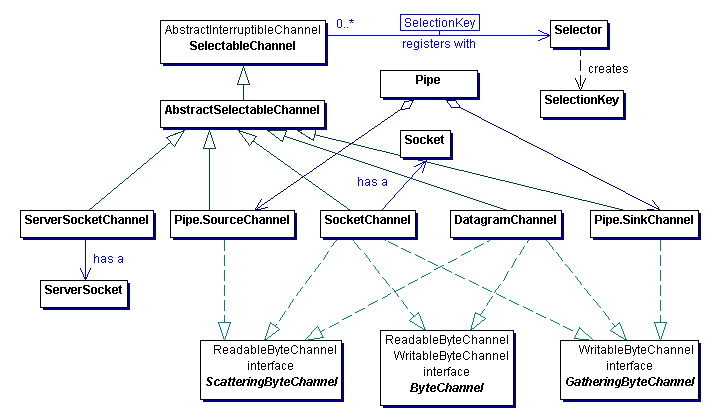 A Selector acts as an I/O manager that keeps track of all the registered channels. When one or more channels become ready for I/O, a set of selection keys are returned indicating which channels are ready and for what type of I/O operation (read, write, connect, or accept). It is up to the developer to iterate over the set and perform the appropriate operation for each channel.

There is a lot of excitement in the Java community about the support for multiplexed, non-blocking I/O. As such, there have been many good articles and examples written to show how to take advantage of these facilities. Refer to the References section for additional information.

In this section, we will look at a log parsing utility that interprets and gathers instrumentation data and generates statistics.

The initial version is resource intensive in terms of memory and CPU time. This will be compared to a modified version that uses some of the NIO facilities.

The application performs the following steps:

The initial version uses a BufferedReader to sequentially read the file from disk. The NIO version uses a MappedByteBuffer to directly map the log file into memory. The expectation is that the new version will exhibit better performance.

The initial version uses a BufferedReader that wraps a File object:

The NIO version gets a FileChannel from the input stream and maps the file into memory by creating a MappedByteBuffer.

To read a line from the byte buffer, the buffer needs to be decoded into characters and split into lines by searching for the new line character(s). One way to do this is convert the entire byte buffer into a character buffer, create a regular expression to match a line, and iterate across the buffer.

This new implementation was slower than the initial version. After profiling the code (using Java's profiler), this solution required significantly more memory due to decoding the entire file into a character buffer.

In addition to the memory increase, a significant amount of time was spent executing the group method that returns the string matched by the find.

An alternative is to create a Reader from the channel using the Channels utility class.

This solution performed better than the line matcher approach but did not show an improvement over the original buffered-reader approach.

In general, the original buffered-reader approach suffers from creating many temporary objects and demanding a lot of memory. The simple attempt to improve the application by mapping the file into memory did not improve the performance.

A more complete solution is to concentrate on reducing the number of temporary objects and making use of direct buffers when possible. This example demonstrates that memory-mapped files are not going to improve performance of sequentially accessed, line-based data.

Memory mapped files, however, can be much more efficient when dealing with large binary data sets or randomly accessed data. This is because the operating system handles the paging of the data and can perform very fast copy and move operations.

For nearly all test cases, the server HotSpot™ performed worse, especially on Linux. The one exception is the 4M file on Solaris.

An interesting note is when running with the server HotSpot™ on Linux, the memory mapped solution performed better for file sizes 500K and above.

The NIO APIs introduce facilities for scaleable I/O, fast buffered binary and character I/O, regular expressions, and charset conversion. They are not intended to replace but to augment Java's current I/O.

The Java community is excited because some of these capabilities were only available to C programmers (e.g., multiplexed, non-blocking I/O, file locking, and memory-mapped files). This will likely enable the migration of high-performance C applications to the Java platform with similar performance characteristics.

Clojure – Functional Programming for the JVM