Thread parallelism is achieved by splitting the workload equally, if possible, among threads.

Instruction level parallelism is achieved by applying the same operation to a block of code and by compiling into tight machine code.

Modern processors have evolved on all sources of parallelism, featuring massively superscalar pipelines, out-of-order execution, simultaneous multithreading (SMT) and advanced SIMD capabilities, all integrated on multiple cores per processor. In this article, we focus on optimizing performance through SIMD.

SIMD processing exploits data-level parallelism. Data-level parallelism means that the operations required to transform a set of vector elements can be performed on all elements of the vector at the same time. That is, a single instruction can be applied to multiple data elements in parallel.

All mainstream processors today such as Intel Sandy/Ivy Bridge, Haswell/Broadwell, AMD Bulldozer, ARM, and PowerPC implement SIMD features, although the implementation details may vary. Since most SIMD instructions on specific hardware involve operations of vector operands, sometimes SIMD operations are also referred to as vectorizations. Although there is a subtle difference between these two terms, in this article we use them interchangeably. 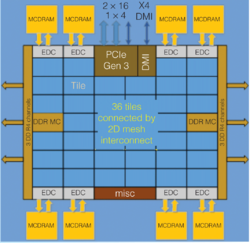 As an example of a processor with SIMD support, the above figure is an architecture diagram of Intel's Xeon Phi. In each core of Xeon Phi's 36 twin-core tiles there two vector processing units (VPUs) which provide the capability of two vector operations per cycle. To enhance vector operations fully exploiting VPUs, Knights Landing provides the AVX512 instruction set for operations on 512-bit vectors.

Vectorization or SIMD is a class of parallel computers in Flynn's taxonomy, which refers to computers with multiple processing elements that perform the same operation on multiple data points simultaneously. Such machines exploit data parallelism rather than concurrency since there are simultaneous computations, but only a single process at a given moment. 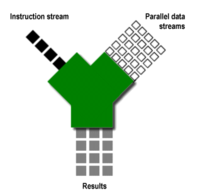 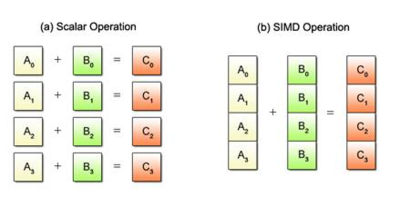 As shown in the figures above, unlike normal operations in which are the scalar operands, a vector operand SIMD operation is an operand containing a set of data elements packed into a one-dimensional array. The elements can be integer, floating-point, or other data types.

Modern compilers like GCC can automatically identify opportunities and vectorize the code without interference by programmers. Automatic vectorization is straightforward and easy to perform with only the knowledge of related compiler options. However, automatic vectorization can only happen if memory is allocated totally and continuous and there are no data dependencies to prevent vectorization.

In addition, compilers don’t always have enough static information to know what they can vectorize. In some cases, they cannot achieve the same performance speedup as code optimized by a human expert.

Besides automatic vectorization by compiler, the programmer may want to explicitly specify parallelism in the code. Vectorization may be explicitly exploited through the use of machine instructions (assembly language) or, to lower efforts of programmers, intrinsics which are functions directly wrapped low-level machine instructions and operations on vector data types.

There are also alternatives which provide higher abstractions than intrinsics. For example, a C++ library libsimdpp is a portable header-only library wrapping intrinsics and presents a single interface over several instruction sets. Boost.SIMD also offers a portable library for SIMD operation under the framework of Boost (currently it is a Boost candidate).

In addition, OpenMP and Open Computing Language (OpenCL) exploit both coarse-grained (thread) and fine grain parallelism (vectorization) in code. They are suitable for to applications exploiting large quantities of data parallelism on many-core architectures.

Generally, there are two places in code where vectorization could weigh in:

Loop-based vectorization
Traditionally, loop-based vectorization is the main focus of performance optimization through vectors. Loop-based vectorization can extract data parallelism from nested loops with large iteration spaces by loop transformations and by dependency analysis. There are many transformations that may need to be performed to allow the compiler to successfully exploit SIMD parallelism. These transformations include loop interchange, loop peeling, etc. Combining these transformations may generate better results than using one of them exclusively. The loop based vectorization techniques can be used to expose parallelism that can be exploited with a basic block vectorization algorithm, so the techniques can be complementary to each other.
Basic block vectorization
Since modern processors offer machine level operations which have smaller vector sizes than vector processor (a dedicated architecture for vector operations) and support a multitude of packing operations, a concept called Superword Level Parallelism (SLP) is introduced. SLP aims to exploit data level parallelism at a basic block level rather than only for loops. A basic block is a sequence of code without any control flow, where if the first statement executes in a block, if the block has no control flow, then all the others are guaranteed to execute as well. To create the appropriate SIMD instructions, SLP packs together isomorphic operations. Basic block level techniques are very effective in exploiting data parallelism in scalar operations. SLP can be exploited even in the presence of control flow. The basic idea is to convert if control to predicated instructions and SLP can be applied.

For loop-based vectorization, there are some principles which can be applied strategically to vectorize the loop computation.

Identify the most important loops

Important loops can most easily be identified by its runtime via performance profiling tools like gprof. But if profiling is insufficient, it is possible to manually instrument some measurement code to provide more precise information. Normally those loops which execute for thousands or millions of iterations and run for very long times are likely candidates for vectorization. Given collected runtime information, one should only choose loops with most runtime and by optimizing them that desired speedup could be achieved. Other loops, in particular, those which are not parallel or otherwise difficult to optimize, may be ignored. So we do not need to waste efforts unnecessarily on those difficult codes.

Loop dependencies are interleaved data operations which can prevent some loops from being parallelized. For example, consider the following example which repeatedly computes partial derivative of a 2-dimensional matrix:

Obviously, the result of each step in the most inner loop depends on its neighbors of the previous steps which are controlled by outer loops. So the t loop and i loop cannot be computed in parallel. However, neither the i nor j loop carry any dependencies, and both can be vectorized.

Normally, after identifying important loops and confirming the loops with vectorization after dependency analysis, there is a list of common transformations techniques for applying. The following transformations are only a small set, so programmers may need to explore more for specific situations.

Now the inner loop can apply vectorization with vector operands size of 16 bytes (strictly speaking this example is only conceptual and needs more transformation to remove the condition j < 4 in inner loop guard before vectorization). Note that we also can use the technique of loop fission (described below) to split the original loop into two loops. One is transformed by stripmining and another is not.

Note that the example introduces an if statement when unrolling, which often causes a performance penalty. A more delicate algorithm using conditional variables could overcome this overhead. 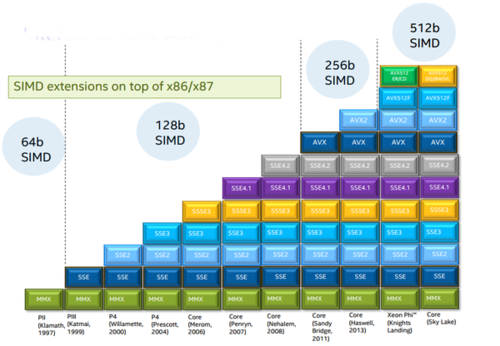 Since AVX/AVX2/AVX512 instruction sets include different SIMD functions, the first thing for vectorization with AVX is to check availability and support in the development and production environment. For example, on Linux the following command directly shows which AVX instruction set is supported on your platform.

For example, on a Intel Core i7 (Sandy Bridge), the above command generate output like:

The only relevant flag avx indicates that no more than basic avx operations are supported on this platform.

Intel AVX is a low-level instruction set. To take advantage of AVX to speed up performance, one could inline a couple of assembly instructions. But obviously, this method is both non-portable and error-prone.

The preferred approach is to use intrinsics instead.

Simply speaking, intrinsics are functions that provide functionality equivalent to a few lines of assembly. Hence, the assembly version can serve as a drop-in replacement for the function at compile-time. This allows performance-critical assembly code to be inlined without sacrificing the beauty and readability of the high-level language syntax. At the same time, the correct intrinsics libraries for AVX development can be detected by following code snippet.

In the intrinsic library, each data type starts with two underscores, an m, the width of the vector in bits, and real data type it builds. AVX512 supports 512-bit vector types that start with __m512, but AVX/AVX2 vectors don't go beyond 256 bits.

If a vector type ends in d, it contains doubles, and if it doesn't have a suffix, it contains floats. It might look like _m128i and _m256i vectors must contain ints, but this isn't the case. An integer vector type can contain any type of integer, from chars to shorts to unsigned long longs. That is, an _m256i may contain 32 chars, 16 shorts, 8 ints, or 4 longs. These integers can be signed or unsigned.

The names of AVX/AVX2 intrinsics can be confusing at first, but the naming convention is really straightforward. Once you understand it, you'll be able to determine what a function does by looking at its name. A generic AVX/AVX2 intrinsic function is given as follows:

Vector type in function names actually refers to the type of data packed in the vector.

As an example, consider _mm256_srlv_epi64. Even if you don't know what srlv means, the _mm256 prefix tells you the function returns a 256-bit vector, and the _epi64 tells you that the arguments contain 64-bit signed integers.

However, once FMA is used, the following command should be executed:

The following code snippets are from Pronghorn, which is developed in Java but could accelerate matrix operation by C++ AVX function through Java Native Interface (JNI). However, whether it is suitable to use native C/C++ AVX function to optimize Java application needs careful consideration. This is to be explained later.

The pointer rowSlab_nat and colSlabs_nat are a vector and a matrix, respectively. The results of this code is a vector of multiplication of rowSlab_nat and colSlabs_nat. Index operations rowMask & (jint)(rowPosition + p) and colMask & (colPositions_nat[c] + p) calculate the index of the operands of multiplication. In this code, the inner loop actually computes a product of two vectors.

The second part is a loop with multiple AVX operations.

AVX Implementation of Vector and Matrix

Vectorization in other languages

Although aforementioned, vectorization through AVX is only shown using C/C++ code for convenience. In other languages, it is also possible to take advantage of AVX optimization.

Since Java application is running on JVM, there is no direct usage of AVX optimization in Java. However, we still could leverage JIT for automatic vectorization, or further AVX optimization through JNI.

Comparison of JIT and JNI Vectorization

The python library, Numpy, has optimized its code to leverage AVX/AVX2. Since it is a cornerstone of most application involved math and matrix operations, there is no need for users to do manual optimization. But vectorization at the level of python code may still be useful since it allows Numpy to implement the operations based on vectorization at the machine level using AVX.

This article only examines basic ideas and usages of vectorization for performance optimization. A simple example demonstrates the process of using AVX intrinsics implement vectorization.

As a powerful performance optimization technique, vectorization could be applied in many applications, especially considering the rich instruction set support of SIMD in mainstream modern processor architectures. Although manual vectorization could require some effort and careful thought on algorithm and implementation, in some cases, it may achieve greater speedup than automatic vectorization generated by compilers.

This article is inspired by optimizing math performance for a Pronghorn project at OCI. I want to thank my colleagues Adam Mitz, Nathan Tippy, and Charles Calkins from OCI for their useful and professional comments that greatly improved the quality of this article.