This article provides an overview of tmux. tmux is short for "terminal multiplexer." It dramatically expands what can be done with terminal windows. It is highly configurable and scriptable.

tmux is an alternative to an older, similar program named "screen". It was created by Nicholas Marriott. The first version was released in 2007.

One benefit of both tmux and screen is realized when working on remote machines where network communication can fail. Both maintain the state of sessions so the user can pick up where they left off by reconnecting and reattaching to the session.

I first learned about tmux from the excellent book "tmux: Productive Mouse-Free Development" by Brian Hogan at http://pragprog.com/book/bhtmux/tmux. If this article piques your interest in tmux, I highly recommend getting this book.

Another excellent source of information about tmux is its long man page. Studying the tmux man page will enable you to maximize the benefits derived from its use. If you decide to print it, generate a nicely formatted PostScript version with man -t tmux > tmux.ps.

This article contains many tables. It is intended to be printed and used as a cheat sheet. The tables have been carefully organized and styled so none of them split across a page break.

Like any software tool, tmux doesn't appeal to everyone. There are three key indicators that tmux is a fit for you.

Typically it is desirable to view certain panes simultaneously. This is accomplished by putting those panes in the same window. The pane border color indicates which pane is active.

Consider creating a separate session for each group of related activities. For example, when working on multiple projects, create a session for each. Each project can have its own script that attaches to an existing session for that project if one already exists, or creates a new session. The script can create a set of windows, each with a set of panes, that are configured in a way that is convenient for that project. The script can also run commands (ex. ssh) in specific panes.

Sessions and windows can have names, but panes typically only have indexes. A pane can be given a title by running this command from the pane: printf '\e]2;title\e\\'. Pane titles are only displayed in customized status bars using #T. Only the title of the active pane is displayed.

To install tmux on a Mac:

Additional Mac-specific advice appears near the end of this article.

The steps to install tmux in a Linux environment vary based on the package manager used.
Here are the steps when using apt-get:

To verify the version of tmux that is installed, enter tmux -V. Note that the flag is a capital V.

There are many tmux commands. The most useful subset and their options (in my opinion) are covered in this article.

Many commands can be executed in several ways that include:

Most keyboard shortcuts are case-sensitive and begin with what tmux refers to as a "prefix key". By default this is ctrl-b, also written as C-b. The tmux man page refers to control key sequences as C-{key} and this article follows that convention. The meta key is abbreviated as M. On a Mac, this is cmd-option by default. Many users bind the prefix key to C-a for convenience and to match the prefix key in the "screen" program. This is done in the sample tmux configuration file shown later.

A common command flag is -t which specifies a target client, session, window or pane.

After installing tmux, following along with this sample session to get a feel for what tmux can do. Where "prefix" appears, press C-a. 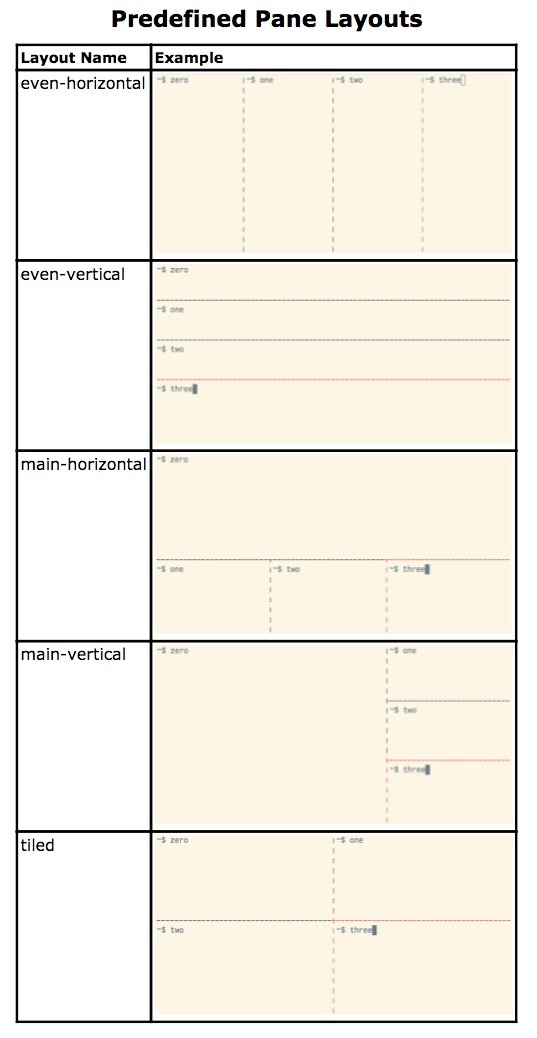 Each pane has a history buffer that stores the shell commands entered and their output. The size of this buffer is specified by the history-limit session option and defaults to 2000 lines. To scroll through the content of a buffer and optionally copy some of its content, enter copy mode using the command shown below.

Each copy creates a new "paste buffer" on a stack. There is one paste buffer stack per session. The stack has a limited size that is specified by the buffer-limit server option and defaults to 20. When the limit is reached and a new paste buffer is created, the oldest one is discarded.

tmux is highly configurable. There are three kinds of options: server, session and window. Options can be global (the common case) or apply to a specific session or window.

There are WAY too many options to describe in detail in this article. The table below is provided simply to give a feel for the configurability of tmux. See the tmux man page for details.

tmux configuration comes from two files. If it exists, tmux reads /etc/tmux.conf which is shared by all users. Then it reads .tmux.conf in the user's home directory (~/.tmux.conf) to supplement and override settings in the first file. Here's an example configuration file that is well-commented to describe each piece. This barely scratches the surface of possible status bar customizations. All characters from a # to the end of a line are treated as a comment and ignored.

Here's an example bash shell script for starting a tmux session named mytmux. A key feature of this type of script is only creating a new session if one with a given name doesn't already exist. If it does exist, the script just attaches to it.

Sometimes it is useful to attach multiple tmux clients to the same session. This can be done on a single machine using multiple terminal windows. It enables simultaneous viewing of multiple tmux windows that belong to the same session. This is especially useful on computers that have more than one monitor or on a laptop that also has an external monitor. After creating a session or attaching to one in the normal way from the first terminal window, create new sessions from other terminal windows using tmux new -t {session-name}. The new session is "grouped" with the target session which enables the sessions to share the same set of tmux windows, but display different ones.

If multiple monitors are being used and they are different sizes (the typical case when one is a laptop screen), tmux will only display the same number of cells (rows and columns) in each terminal window. Excess cells in larger terminal windows are filled with period characters. To avoid this, set the window option aggressive-resize to "on", preferably in a tmux configuration file.

Having multiple clients attached to the same session can be used for collaborative work, including pair programming. To do this, login to a machine where ssh is enabled and start a tmux session. Then ask each participant to ssh to that machine and attach to the tmux session in the normal way, tmux attach -t {session-name}. Each user will see the results of what others do in the shared session.

The Mac OS X Terminal program in Snow Leopard and earlier only supports 16 colors. To get 256 colors, iTerm2 must be used. This is a free Terminal replacement that can be downloaded from http://www.iterm2.com/. After starting iTerm2, activate the iTerm menu and select Preferences ... Profiles ... Terminal. In the "Default" profile, set "Report Terminal Type" to "xterm-256color". Quit iTerm2, restart it, and verify that the TERM environment variable is set to "xterm-256color" instead of "xterm". In addition, add the following command to ~/.tmux.conf:
set -g default-terminal "screen-256color"

There are some preference changes that are needed to allow certain tmux shortcut keys to be used on a Mac. In System Preferences, select Keyboard ... Keyboard Shortcuts ... Mission Control and uncheck "Move left a space" and "Move right a space". Those keyboard shortcuts are the tmux defaults for resizing a pane left or right by one cell. In iTerm2 preferences, select Profiles ... Keys and select "+Esc" for "Left option key" and "Right option key". This allows cmd option to be used as the meta key in tmux.

Earlier it was recommended to change the prefix key to C-a. If this is done, also consider changing the caps lock key to function as the control key. There are two reasons for this. The caps lock key is larger than the control key and it is next to the "A" key. To make this change, open System Preferences, select Keyboard ... Keyboard tab ... Modifier Keys, and select "^ Control" from the drop-down list next to "Caps Lock Key".

iTerm2 uses "Lion-style" fullscreen windows by default. This is an issue when multiple monitors are being used. Putting a terminal window in fullscreen mode does so using only one monitor and the other becomes unusable. To fix this, open iTerm2 preferences, select the General tab, and uncheck "Use Lion-style Fullscreen windows". Now to make an iTerm2 window fullscreen, press cmd-enter. Press it again to toggle out of fullscreen mode.

tmux does not integrate with the Mac system clipboard by default. This means cmd-c and cmd-v cannot be used to copy and paste text from and to tmux panes. However, there is a way to configure this functionality with other keys. Here are the configuration steps:

To select text from a tmux pane, select it with the mouse (if mouse-mode option is set to on)
or enter copy mode (prefix [), move to start, press space bar, move to end, and press return.
To copy the selected text to the Mac system clipboard, press prefix C-c.
To paste text from the Mac system clipboard into a tmux pane, prefix C-v.
Copying and pasting text from and to Mac applications is done in the normal way.

tmux certainly has a learning curve. However, the effort pays off in increased productivity.

Several people provided feedback on this article. I especially thank Charles Sharp and Brian Hicks who provided the most extensive reviews.

Additional feedback on this article is welcome. Please email it to mark@ociweb.com.